Boone County Sheriff’s Dept. Deputy Scott Pell is convinced it’s time to take the department in a new direction and that he is the person to do it. 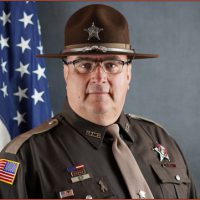 “I love working here, and becoming the sheriff is the natural goal for any deputy who really wants to make a difference to the community,” Pell said. “I’ve thought about this my entire career, and now is the right time for me to run.”

Pell, 55, has worked for the sheriff’s office for more than 30 years. He filed his paperwork to declare his candidacy Jan. 5 for the May 3 primary. As of Jan. 12, the only other candidate in the Republican primary is BCSO Chief Deputy Anthony (Tony) Harris. BCSO Sheriff Mike Nielsen is not running for reelection because of state term limit laws.

“Both the jail and enforcement division have seen incredible turnover for the last few years, which we must stop,” Pell said.

Pell said his goals include recruiting great employees, providing top-notch training and tools and offering the best pay and benefits.

He also aims to give more attention to drug enforcement, which he said he “has been neglected completely by the current administration.”

Pell said he has the ability to repair relationships.

“I feel I have a reputation of being fair, honest and giving respect to every person and agency I work with,” he said. “We’re all partners in public safety, and by simply abiding by the golden rule, I can fix the strained relationships with law enforcement, criminal justice agencies and other stakeholders. Aside from being the right thing to do, it makes all of us better.”

Besides working as a deputy in the patrol division for several years, Pell has served as a special response team member, assistant team leader and sniper, detective, field training officer and crisis intervention member.

Pell said excessive spending has happened under the present administration.

“I have also started and operated three successful businesses, which gives me the experience to operate the sheriff’s office as if it were using my own money,” said Pell, a Lebanon High School graduate. “I also know treating people with respect is simply good business. After working for five different sheriffs, I know to surround myself with the absolute best people I can find, because this is the key to running a successful office. I don’t have to have all the answers. It’s more important to assemble a great team and I will.’