Zack Reising developed a passion for air travel at an early age.

“I was interested in being an astronaut (until) I learned I was too tall,” the 6-foot-3 Reising said. “Coincidentally, about the same time, my dad took me to his fraternity house at Purdue and there was a picture of (Apollo 11 astronaut) Neil Armstrong (who also had been in the fraternity). (Armstrong) got his pilot’s license before he got his driver’s license. I said, I wanted to be like him. That got me on the track of being an aviation geek.” 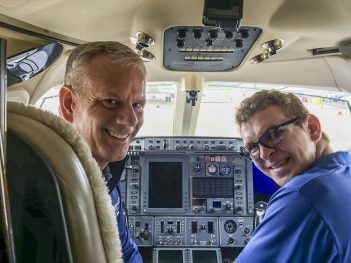 Greg Mink, left, takes Zack Reising on a ride in his airplane.

“I call him a rock star,” Mink said. “Everybody loves seeing him. He’s been the recipient of several nice gifts from a lot of my viewers, including a flight simulator. Someone had a custom model of my jet made and had me give it to him. I like to call Zack my inspiration.”

Sam Pittman met Reising by helping produce videos for Greg Mink. Pittman’s company, Scannell Properties, got the idea to help Reising through his company’s Pay it Forward program. So, he talked with Reising and his father about creating a fund to help with Reising’s flight training.

“Zack selflessly decided he wanted the funds to go to Able Flight instead of his own flight training,” Pittman said. “Able Flight gives so many people the opportunity to fly with a multitude of disabilities.” 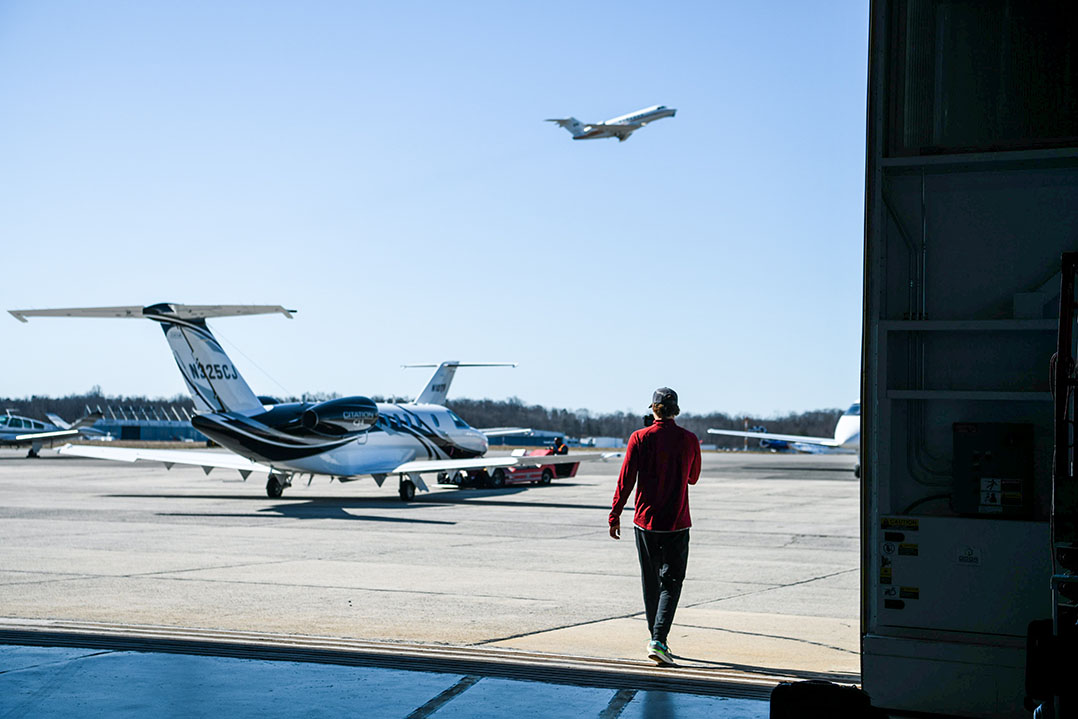 “This was my first documentary style,” said Pittman, who grew up in Carmel and graduated from Heritage Christian High School. “My original idea was, I see the comments on the videos on what an inspiration Zack was and wondering if there was any way to give back to him.”

Getting the video on Mink’s channel was important in drawing attention.

“It’s a tight-knit community online,” Pittman said. “It resonated with a lot of people to help other pilots in need. They thought it was a great cause.”

Jeff Reising said his son was excited about the project because he wanted to give back.

“There are at least half a dozen people who have been off the charts with the opportunities. Zack saw this as a way to give back and help others with disabilities,” Jeff Reising said. “That was the driving force pushing this.”

The Able Flight Blue 7 Scholarship GoFundMe page, started by Pittman, had an original goal of $30,000, but it has already reached $40,804. Blue 7 is a nickname Mink gave Reising.

Reising said additional funds have been sent directly to Able Flight for the Blue 7 scholarship, raising the total to $44,000. The $30,000 goal was to help three people with disabilities complete the Able Flight program — one per year.

Reising’s goal has been raised to $54,000 so more can take advantage. Reising, who does have his driver’s license, is working toward a pilot’s license.

“Legally, he can get his pilot’s license and alternatively he can get a light sport aircraft license, which requires fewer hoops to go through and requires only a driver’s license,” Jeff Reising said. “Then you just have to do the flight stuff. Zack has passed his written test and has 125 flight hours already. “

Zack Reising spends plenty of time on his flight simulator.

His father estimates his son has 600 to 700 hours on his simulator, which helps develop skills with avionics and instrument work.

“If and when he does get his pilot’s license, he can make good use of that practice,” Jeff Reising said.

Greg Mink, a former Westfield resident, invited Zack Reising and his family on a flight to Dallas.

“So, Zack came in the front seat with me,” Mink said. “He shows up in a Blue Angels shirt, so I give him (grief) about showing up in a Navy shirt when I’m an Air Force guy. The Navy Blue Angels are called the Blues, so I call him Blue 7, referencing the last Blue Angel, since there are only six Blue Angels. He calls me Thunderbird 1. It’s kind of a little banter we have back and forth. But it shows his humorous side, and that’s what I just love about the kid. He walks around with the aid of a walker and has great physical difficulties, yet he has this wonderful, glowing outlook on life.”

“He knows no strangers,” Mink said.

Mink, who had lived in Westfield for several years, now splits his time between homes in Florida and Colorado. Mink is the chief executive officer of Indianapolis-based Modular Devices, Mobile Lab Solutions.