You are at:Home»Night & Day»Entertainment News»Gregory Hancock Dance Theatre puts its twist on ‘The Black Dahlia’

Hannah Brown is delighted to get another opportunity to be “The Black Dahlia.”

“It’s exciting to do a leading role and to get to do it more than once,” the Carmel resident said. “It’s nice to be able to look back on what you did five years ago and see what worked and what could have been improved and then work harder to try to make it better this time — grow the character a little more and dig a little deeper to the path of the character and her motivations.”

The production is inspired by unsolved 1947 murder of Elizabeth Short in Los Angeles. She was nicknamed the Black Dahlia by the press for her rumored penchant for wearing sheer black clothes. The film “The Blue Dahlia” also had come out in 1946. 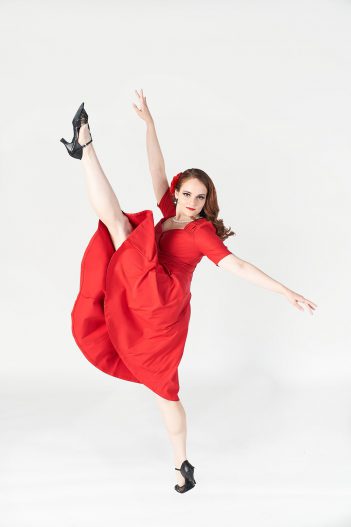 The show was previously presented by the Gregory Hancock Dance Theatre in February 2017.

“I’m working on the acting elements of the part,” Brown said. “I’ll try to make the dancing elements stronger and cleaner. Not that I think it went bad the last time, but five years later I’ve grown as a dancer. I’m trying to elevate myself. My confidence and comfortability on who I am as a dancer has grown.

“I’m more aware of my strength and where I need more work.”

Carmel resident Abigail Lessaris, who plays Short’s sister, said although the show is based on the gruesome murder, it is an entertaining “whodunit.”

“We’ve taken it and twisted it and given it fun characters on what could have happened,” Lessaris said. “It’s really not so dark. It’s kind of like if you went to a murder mystery dinner and everyone was acting out these dramatic parts that could have happened. There is a nostalgic feeling.”

Gregory Hancock said the production, which has a film noir atmosphere, has a lot of fun music.

“I like to take some beautiful, light music and put something a little dark with it,” Hancock said. “It’s not that we’re being disrespectful of the story. It’s very sad and emotional at the end. For the audience, it’s nice to have this nostalgic feeling about the music, about the old Hollywood style of hair and makeup.

“At the end, this was a real person and murder. We’re taking artistic liberties to make it more theatrical.”

“What was their motivation for saying they did it, even though they didn’t?” Lessaris said. “What could have driven someone to murder her? Before she dies, there is a lot of interaction with the character. There is a lot of buildup to the murder.”

Hancock said the audience can decide what happened at the end between four scenarios.

There are five monologues as part of the show.

“It’s very much a dance show, but we’re speaking and delivering our monologues to the audience,” Lessaris said.

Hancock said it’s a little easier for performers to do monologues in the more intimate space than their usual home at The Tarkington at the Center for the Performing Arts in Carmel.

“Some of the monologues have been tweaked to help the storyline,” Hancock said. “I’ve added three new sections of choreography to elaborate on the stories a little bit.”