Girls hockey players from Westfield got to share their love of the sport on national television.

An Indianapolis production company contacted program director and Indy Junior Fuel’s 19U head coach Kris May, who then chose the girls who she wanted to participate in the national promotion spot that ran during the Winter Olympics.

Six girls from Westfield on the Indy Junior Fuel teams were featured in the promotion, which showed why girls are attracted to hockey. The U.S. women’s hockey team earned a silver medal at the Olympics in Beijing in February. 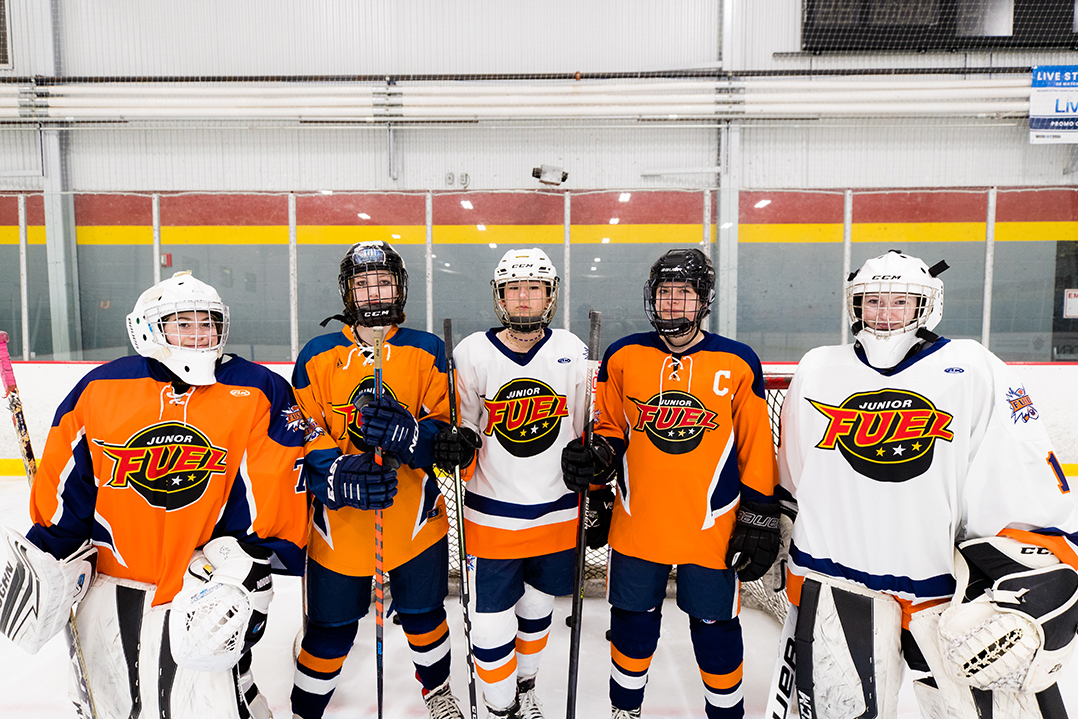 “I love the environment and the people within the game,” Clara said. “It’s a very fast sport, so I guess you don’t get bored ever. You get a lot of new experiences with it and it’s also very competitive.”

Clara played goalie on the 19U team and on the Westfield High School team, which includes four girls, last season.

“The goal is to play in college, but we’ll see,” Clara said.

Clara and Evelyn started playing hocket at the same time.

“We got involved in a ‘girls play hockey’ for free,” Evelyn said. “It was pretty much a public skate, but it was for girls who were starting to play hockey.”

Like her sister, Evelyn immediately took to the sport.

Preparing for the TV spot took some practice.

“There was a script and there were a bunch of lines, and they were all color coordinated,” Clara said. “Different people would get a different set of lines. They would just say, ‘Read the orange line.’ Most of it was over and over again to get it perfect. The person who filmed it got to choose which line sounded best.”

Lily said it was cool to see herself in the promotion. She said some people are surprised when they learn she plays hockey.

“They usually have a lot of questions,” Lily said. “I love that it’s a fast game. I play lacrosse, too, but hockey is my favorite. My goal is to play in college.”

Rose started playing when she was 6 years old, the same time her older sister started.

“I like being athletic and doing (activities) after school,” said Rose, who is on a summer swim team. “When I started, I wasn’t very good at skating because I only ice skated twice. I eventually learned how.”

Rose said she was nervous at first filming the promotion.

“Saying the lines in front of the camera made me nervous,” Rose said.

Rose said she was amazed when she saw the finished product.

Bluto enjoyed being part of the TV promotion, too.

“It was fun seeing yourself on television and getting all the support from friends and family,” she said. “Just being in something like that was cool. I saw it on USA Hockey Instagram and its Facebook (page).”

Bluto started skating when she was 3 years old.

“I’ve been playing since I was 5,” she said. “I think it’s a unique sport. You don’t hear everyone playing it, and I like the team, too. I feel like the program has grown a lot and a lot more girls have joined.”

Roping them in: Westfield teen an accomplished competitor on the rodeo circuit