You are at:Home»Current in Noblesville»Noblesville Community»Noblesville senior among student athletes to be recognized by National Football Foundation

Noblesville’s Guy Griffey, a senior at Hamilton Heights High School, is one of 16 Hoosier students set to receive a $1,000 college scholarship from the Central Indiana chapter of the National Football Foundation. The award will be presented at the chapter’s May 15 annual Student Athlete Banquet. The event will be held at the Primo South Banquet Hall in Indianapolis.

“It’s the cream of the crop of these kids. Most are at least in the top 5 percent or 10 percent of their class,” NFF board member Terry Coyle of Carmel said of the winners, 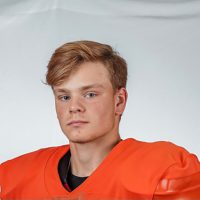 Griffey has made his mark for the Huskies on the field and in the classroom. The quarterback led Hamilton Heights to a 6-4 record this fall, the first winning season for the Huskies in six years. He passed for a career-high 1,500 yards and accounted for 18 touchdowns, 16 through the air.

Griffey, the son of Matt and Julie Griffey, excels in his studies, too. He ranks in the top 10 percent of his class academically.

Nominations for the scholarship are made by the student-athlete’s football coach. In his recommendation letter, Hamilton Heights head football coach Jon Kirschner said of Griffey,

“He’s the guy in the room you turn to for how it should be done. Guy’s drive brings his peers in the class up. People in class look up to him as someone to emulate when it comes to the definition of work ethic, dedication, charisma, and success in the weight room, on the field and in the classroom. Another strength of Guy’s comes in his ability to articulate to others his thoughts, on leadership, sports, school, etc.”

The selection criteria are based equally on academic talent, community involvement and athletic ability. Nomination forms are sent to athletic directors and head football coaches at 120 high schools in central Indiana.

The National Football Foundation’s mission is to use amateur football as a vehicle to develop academic excellence, leadership and sportsmanship in America’s youth. One of its best-known public-facing programs is its sponsorship of the Chick-fil-A College Football Hall of Fame in Atlanta.

This is an auspicious year for the NFF as it marks its 75th anniversary. During that time, the organization has awarded $22 million in scholarships. Indiana has three NFF chapters – Central Indiana, Southern Indiana and the Joe Tiller chapter at Purdue.

Sponsorship opportunities, including the title sponsor, and tickets to the event are still available. For details, please reach out to Terry Coyle. She can be reached at terrycoyle@yahoo.com or at 317.440.8433.

Students to be honored at the National Football Foundation’s Student Athlete Banquet are: