So, as part of his recently released book, “Tales of the Twentieth Century,” which examines Carmel’s history from 1917 to 1976, he researched soldiers from Carmel. 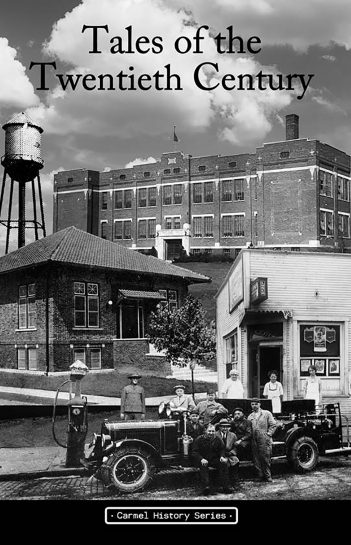 ‘Tales of the Twentieth Century’ is available at CarmelClayHistory.org or All Things Carmel. (Photo courtesy of CCHS)

“During World War I, the Germans practiced unrestricted submarine warfare, which meant that they attacked just about any vessel in the ocean,” Wright said. “To combat this, the Navy stationed gun crews on merchant ships. Carmel native Elmer Arnold was a commander of the gun crew aboard a cargo steamer called the SS Chincha.”

Wright said in the spring of 1918, the ship was crossing the Atlantic Ocean without a military escort when a submarine was spotted. Arnold’s crew only fired one shot from the rear gun when it was destroyed by the sub, killing four sailors.

“Arnold and the rest of the crew moved to the forward gun and landed some shots very near the sub, which submerged and gave up the fight,” Wright said. “It was a remarkable feat for a steamer with one gun to repel a sub. The story was published in newspapers across the country, and Arnold was awarded the Navy Cross.”

For the section on World War II, Wright wrote about the story of Minnie Doane, who was well known in Carmel.

“She served three terms on the city council and was involved in just about every club and non-for-profit you can think of,” Wright said. “When the Women’s Army Auxiliary Corps was established in 1942, she immediately enlisted. She quickly rose to the rank of first sergeant and was tapped to lead the 5205th WAC Detachment in the General Headquarters Company of Gen. Douglas MacArthur. She island hopped with MacArthur’s headquarters company until the end of the war and was awarded a Bronze Star.”

Wright said the flu pandemic peaked in Carmel in the fall of 1918.

“In October, the Indiana State Board of Health issued a set of orders that included a ban on all public gatherings,” Wright said. “All schools, churches and lodge halls in Carmel were shut down. There was also a state-issued ban on spitting on sidewalks and in public buildings and train cars. There were no mask mandates, but many people chose to wear gauze face masks in public to prevent the spread of the disease. At least seven Carmel residents died from the disease that fall. Carmel schools were closed for a total of 11 weeks, longer than any other district in the county.”

“In the post-war era, young families moved to the suburbs in large numbers and started the baby boom,” Wright said. “The growth in Carmel quickly overwhelmed the school system in the 1950s, which only consisted of two schools — Carmel High School and Clay Center School. At the time, Range Line Road was the border between Clay and Delaware Township. Voters on the east side of the river kept the project in limbo until the portion of Delaware Township west of the river was consolidated with Clay Township in 1955.”

The book is available online at CarmelClayHistory.org and at All Things Carmel on Main Street.