The twins, who were born in India but moved to the U.S when they were young, both completed their first half-marathon April 9 as part of the Carmel Marathon races. Their mother, Preeti Mishra, also completed the half-marathon. Their father, Maruti Nandan, is a runner but couldn’t compete because of an ankle injury. 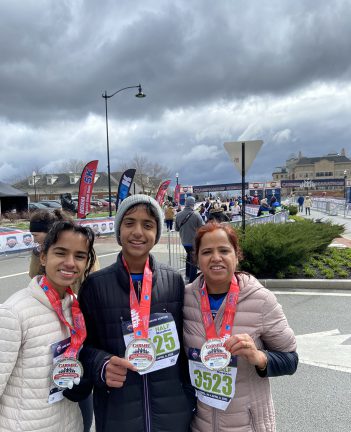 From left, twins Anwesha Mishra and Akshansh Nandan and mother Preeti Mishra all completed the half-marathon as part of the Carmel Marathon races. (Photo courtesy of Maruti Nandan)

Akshansh and his sister Anwesha both compete for the Zionsville West track team and previously competed in cross country for the middle school.

“Since this was my first ever half marathon, finishing it after all that training made me immensely proud,” Akshansh said. “Claiming the medal after crossing the finish line made me even more delighted.”

Akshansh said his goal was simply to complete it.

“Even so, I was pleased to find out I had run a 2:20 hour half marathon,” he said. “I love distance running as it helps me relax after a long, tiring day and I can go out for a run a few miles any day without much preparation. It also helps me to be active and stay fit.”

Anwesha said she had mixed feelings about running her first half-marathon for multiple reasons.

“More than excited, I was nervous about completing the half-marathon,” she said. “I doubted my pacing abilities and aimed to just complete the half-marathon for experience. However, I was excited to see how I could perform in this challenge. I was interested in testing my current running capability as well as improving my long-distance stamina. I was also excited for the opportunity to run amongst many other runners.”

“I was very satisfied with my time, as it was just under my goal of two hours,” she said. “I had predicted an estimated finish time of two hours and 30 minutes, which I well surpassed. I was pleasantly surprised that I was competent enough to push through. Since I knew I gave it my all, I would’ve been delighted with any time.”

Anwesha said she enjoys the feeling of accomplishment that comes with distance running.

“It is the best feeling when you notice your efforts resulting in improvement,” Anwesha said. “I love setting running goals and attempting to exceed them. Distance running can test your willpower and prove your capability. The community built around running adds to the enjoyment. Sharing this common interest, you get to know many new people through the sport.”

Anwesha said she plans to enter another half-marathon next year with more training and better preparation.

“During this half marathon, I was able to prove my determination, which was very uplifting,” she said. “I learned so much from this experience. I believe that my pacing has improved as well as confidence in my running skills.”