Giffin will be the second boys coach in program history. Jack Keefer announced his retirement earlier this month after 46 seasons as the boys head coach. 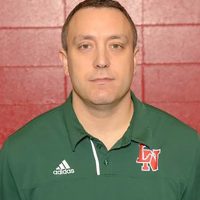 In total, 15 of Giffin’s former players have gone on to play NCAA Division I basketball.

Prior to coaching the girls team, Giffin spent 10 years in various roles under Keefer and the boys program. Giffin previously spent one season as the boys freshman coach, winning the Marion County Championship in 2004. Following that, he served four years as the head boys junior varsity coach, compiling a 67-11 record. He also served as Keefer’s top varsity assistant for two years.

Giffin graduated from Ben Davis High School, where he played basketball, baseball and tennis. He was named to the Indiana All-State doubles tennis team in 1995-1996. He attended Indiana University and was a basketball manager for three seasons under coach Bob Knight.

After earning a bachelor’s degree in secondary social studies education, Giffin became a graduate assistant for Knight at Texas Tech University in 2003-2004.

Giffin is in his 17th year of teaching in the special education department at Lawrence North High School.

“Coach Chris Giffin will continue the tradition of excellence at Lawrence North High School. His student athletes perform at the highest level both in the classroom and on the court,” Lawrence North Principal Brett Crousore stated.

Griffin and his wife, Jenica, have two daughters, Bailee and Emmerson, and a son, Parker.