The Carmel Clay Public Library will feature the artwork of Carmel High School senior Connor Heagy, winner of a mural contest, in the new Teen Area at the expanded Main Library, which reopens to the public this fall.

“To be selected for this mural, it means the world to me. I have always wanted to make an impact with my art, and I believe this accomplished that goal,” Heagy said. “With my mural in the new teen area, I hope to make people curious, inspired and uplifted. I am thankful that I can leave a positive mark on our community.” 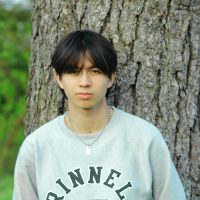 Initially, the library was considering a digital wall covering with a predesigned pattern, but officials liked the idea of having a local teen design the art for the wall to make the space more “authentic and a reflection of the community,” according to Mike Cherry, young adult librarian.

“Connor’s work demonstrated a range of creativity, curiosity and imagination. Those are ideas we are trying to communicate in the new teen space,” Cherry said.  “We want teens to have a sense of curiosity and wonder when they visit the Teen Services Dept.”

Heagy said the theme of his murall is “organic growth and the manifestation of weird characters.”

“I found my inspiration in my school notebook. In class, I often have a habit of doodling while my teacher lectures,” he said. “These doodles set the foundation for my mural. I pulled many characters and ideas from my notebook, full of art and math problems.”

Heagy has been involved in art since he was young, taking art classes on summer vacations in Taiwan where some of his family lives.

“What drew me to art was the exploration and journeys that are incorporated in the process of drawing,” Heagy said. “I love the versatility and the fact that I can learn a million different styles within a medium. It is the process of learning new things that never ceases to excite me.”

Cherry said he hopes patrons enjoy seeing the mural and revisit it each time they come to the library.

“We hope they experience different stories and find new characters each time they view it. In that sense, it is not static but interactive,” he said.

Heagy said he hopes his mural will inspire a sense of nostalgia, inspiration and a smile for those who see it.

“I think the lighthearted nature of my mural will allow people a moment to decompress and relax,” he said.

The mural will be above study rooms and program space in the library’s new first floor Teens Area. Heagy also received a $2,000 stipend.