The Zionsville Redevelopment Commission voted April 25 to proceed with negotiations with developers interested in several parcels in Creekside Corporate Park.

Proposed plans at the site along 106th Street west of Main Street include a one-story building to primarily house medical offices, a facility for a high-end pool cover business and other tenants, a two-story office building and a shared headquarters for two Carmel-based companies seeking to relocate. None of the deals are final. 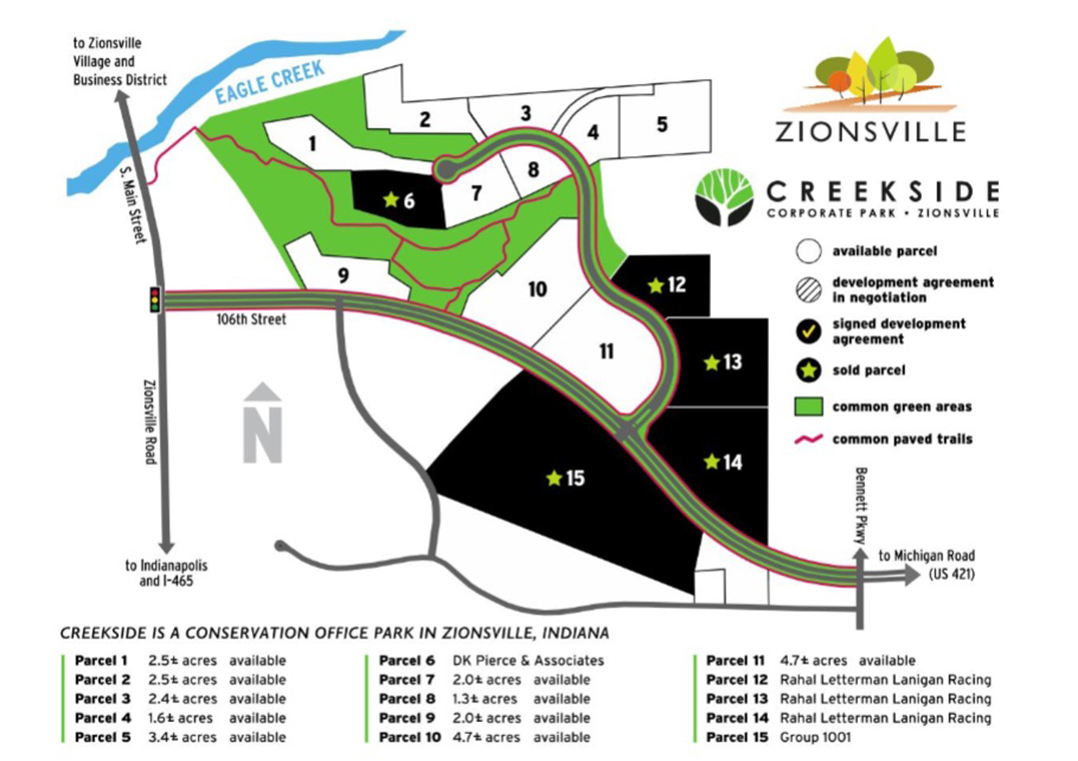 Most parcels at Creekside Corporate Park are available. (Image courtesy of the Town of Zionsville)

Lauth, a Carmel-based developer, is seeking to build a one-story medical office building that could also be used for other professional services on Lots 2 and 3 on the north side of Creekside. Brady Jacoba, Lauth vice president of business development, said two dentists and an orthodontist have already expressed interest in relocating to the site.

A rendering of the proposed building hasn’t been completed yet, but Jacoba said he envisions it could be similar in style to the Hancock Wellness Center in McCordsville, which was also developed by Lauth. He said the building would be approximately 30,000 square feet, with six tenants each occupying approximately 5,000 square feet and having their own entrance.

“A lot of these sites (in Creekside) have some considerable development challenges with geometry, topography, etcetera,” Jacoba said. “We feel this is a perfect project for these particular lots.”

Other local projects developed by Lauth include the Agora building at The Proscenium in Carmel, First on Main in Carmel and the Braden Business Systems building in Fishers.

Kendall Property Group is seeking to build two 9,600-square-foot buildings on Lot 9, which is on the west side of the corporate park. The Indianapolis-based company intends to move into half of the western building, with professional services tenants occupying the other spaces.

Kendall Property Group President J.R. Kendall, whose father founded the company in 1988, said he and his father are both Zionsville residents and that they would like their office to be there, too.

“We’re looking for a nicer custom space for our company,” Kendall said, adding that he’s had his eye on the lot for a few years.

The Creekside PUD, a document approved by the town in 2015 that sets development standards for the corporate park, calls for retail on the first floor of Lot 9, but Kendall is hoping the town will update the ordinance to allow general office uses there instead. The town is planning to review and likely revise the PUD in the coming months.

The RDC approved a letter of intent from TreSSS LLC, which makes hardscape pool covers, to build its headquarters and additional space it can lease to tenants until it is ready to expand on Lots 4 and 5.

If the project moves forward, TreSSS is aiming to begin construction in April 2023 so it can open in the new space by May 2024. The company is also seeking updates to the Creekside PUD, such as reduced setbacks and a wider range of building materials.

The RDC also officially launched discussions with EO Advisors and Plow Digital, two companies based in Carmel’s Midtown that are aiming to build a headquarters building they would both occupy on Lot 7 in Creekside Corporate Park.

The proposed building would include separate areas for EO Advisors, a boutique investment bank, and Plow Digital, a software development firm, and shared flex and event space in the middle. Each company is expected to eventually employ approximately 20 people.

The commission also discussed a proposal from Graham Rahal Performance to purchase Lots 10 and 11 to relocate and expand the Brownsburg-based Rahal Vehicle Performance Center and a Ducati sales and service center. Commissioners decided not to vote on the term sheet to allow for additional time to collect information about the project and its implications for existing Creekside tenants, despite requests from three town council members to keep the project moving.

“It’s a great, great (development) that Zionsville would be able to hang its hat on in the future,” Town Councilor Jason Plunkett said during the public comment portion of the meeting. “I think it’s a mistake if we let it go dry right now. I encourage the RDC to consider moving forward on it. I really believe that we should. I don’t want to do anything that would harm the deal.”

Nine candidates vying for three spots on Noblesville Township Board