You are at:Home»Current in Carmel»Carmel Community»Athlete of the Week: Esposito provides lift from leadoff spot to Carmel High School softball team

For Carmel High School junior Sophie Esposito, playing softball was a given.

“My dad had a bat in my hand from the moment I could walk,” Esposito said. 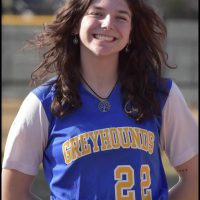 Eventually, she began playing on the Carmel Pups softball team.

“(CHS seniors) Kylie Cunningham and Ella Ohrvall were on my first Pups team,” said Esposito, who played Pups for two years before joining Indiana Magic Gold. “We set a goal when we were 12 that we would play high school varsity softball together, so it’s cool that we have accomplished that goal.”

Cunningham and Esposito alternate each game playing second base and shortstop.

“She leads off the lineup this year and can immediately set the tempo of our game offensively,” Britton said. “She loves to be aggressive at the plate, going after good pitches early in the game. She is intelligent on the base paths and looks for opportunities to advance and score runs. Most importantly, Sophie is a player that puts her teammates in front of herself.  She is quick to give positive encouragement. She will always celebrate the successes of her teammates twice as hard than how she enjoys her own.”

In the Greyounds’ first 15 games, the Indiana State University commit was hitting .500 with five home runs and 12 runs batted in. Her season highlight to date was the April 22-23 Carmel Invitational.

“The team went 3-1 that weekend and we had some great moments. My individual accomplishments that weekend include hitting a walk-off home run to win the game against Avon after Jess Remm hit a homer to tie the game. Then, I hit a three-run home run against Franklin Central to tie the game and the team went on to win that game as well. We faced No. 1-ranked Roncalli, and I had the opportunity to face Keagan Rothrock. I hit a leadoff home run.”

Rothrock is the nationally top-ranked pitcher in her class by Softball America.

Esposito said the mental side of the game is where she has made the most improvement.

“Softball is a game of ups and downs, and players are going to experience failures from time to time,” she said. “This season, I have learned from my failures but haven’t let them affect me on the field. Coach Britton has done a good job of not only coaching us on the physical aspect of the game but has also worked with us to strengthen our mental (approach to the) game.

“I have also improved as a team leader. I am much more vocal on the field and feel that I have been a good encourager to all the girls on the team, especially the underclassmen and JV players.”

Esposito, who played soccer and basketball growing up, started training at Carmel Total Fitness when she was 11.

“Weight training is like a second sport to me now,” she said. “It helps me to become bigger, stronger and faster.”

Esposito, who will attend the FBI Youth Leadership Academy June 8-10 in Bloomington, wants to pursue a career in criminal profiling. She plans to study criminal justice and psychology at Indiana State University.