The Village of WestClay is now home to MacArthur Books. The bookstore opened last month and hosted a grand-opening celebration April 30, which coincided with Independent Bookstore Day, celebrated by indie booksellers across the nation. 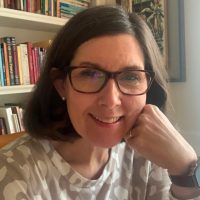 “Many booklovers visit a series of stores on that day, so we saw lots of folks who wanted to check out the new store as part of their personal Independent Bookstore Day tour,” said Cynthia Compton, store owner. “Overall, business has been great, and the community has been very welcoming.”

Compton also owns 4 Kids Books & Toys on Michigan Road. She believes she had several advantages in opening the new store.

“First, we are located right in the heart of the Village of WestClay, so we have great visibility to (those) residents and helpful marketing support from the Village in their weekly newsletters,” Compton said. “Second, we have a very active email and social media newsletter program with our customers at 4 Kids Books & Toys, so we had another way to share the news about MacArthur Books.”

The 4 Kids store began carrying some adult titles several years ago, and Compton said it was “apparent from the sales and interest in that small section of our store that a general bookstore might be a good possibility.”

“In December, I discovered some options in the Village and was able to secure a lease early this year. The location is ideal. We are on the first floor of the Founders Building, a landmark in the commercial area of the village, and directly across the street from the park,” Compton said. “We are just a block away from the Meeting House, which we used to host Al Unser Jr. for a book signing event in March, before we had even started the build-out of our space. That extra space to host events is the stuff of dreams for booksellers. We are always looking for locations that are large enough for author tours and convenient for customers to attend.”

This summer, the bookstore will participate in a series of author events with the Prime Crime conference, held in October at the Columbia Club in Indianapolis.

“Prime Crime brings together authors and readers of mystery and murder, and I have served as the official conference bookseller for the last five years, hosting 40 to 50 authors over the three-day event,” Compton said. “This year, to promote the conference, Prime Crime will be hosting a summer series featuring four authors, with one visiting the club each month to do a lecture and book-signing event. Working with the Columbia Club, MacArthur Books will be bringing each of those authors for a bookstore event in Carmel as well.”

The schedule is still being finalized, but Compton said the events are planned for June, July, August and September. MacArthur Books, at 2169 Glebe St., and the Meeting House in the Village of WestClay will host the book signings and talks.

Compton said people are surprised to learn she has opened a second bookstore, and that the first store has been successful for 19 years.

“There’s a bit of a public misconception, I think, about the health of brick-and-mortar bookselling in the U.S., perhaps based on dire outcomes predicted for retail as Amazon expanded or when electronic readers were launched,” she said. “The actual market snapshot of retail bookselling, however, is rather amazing. Physical books are the preferred vehicle for reading material by far, as the e-reader market makes up only 18 percent of books sold.”

Fiction authors Hauty, Webb to speak in Carmel May 6