The Noblesville Common Council met May 10 for a regular meeting. Agenda items included a presentation from the urban forestry board, a request to allow for the use of veterinary hospital in Pebble Brook Village and an introduction to a rezone request for a multifamily development. For more, visit cityofnoblesville.org. 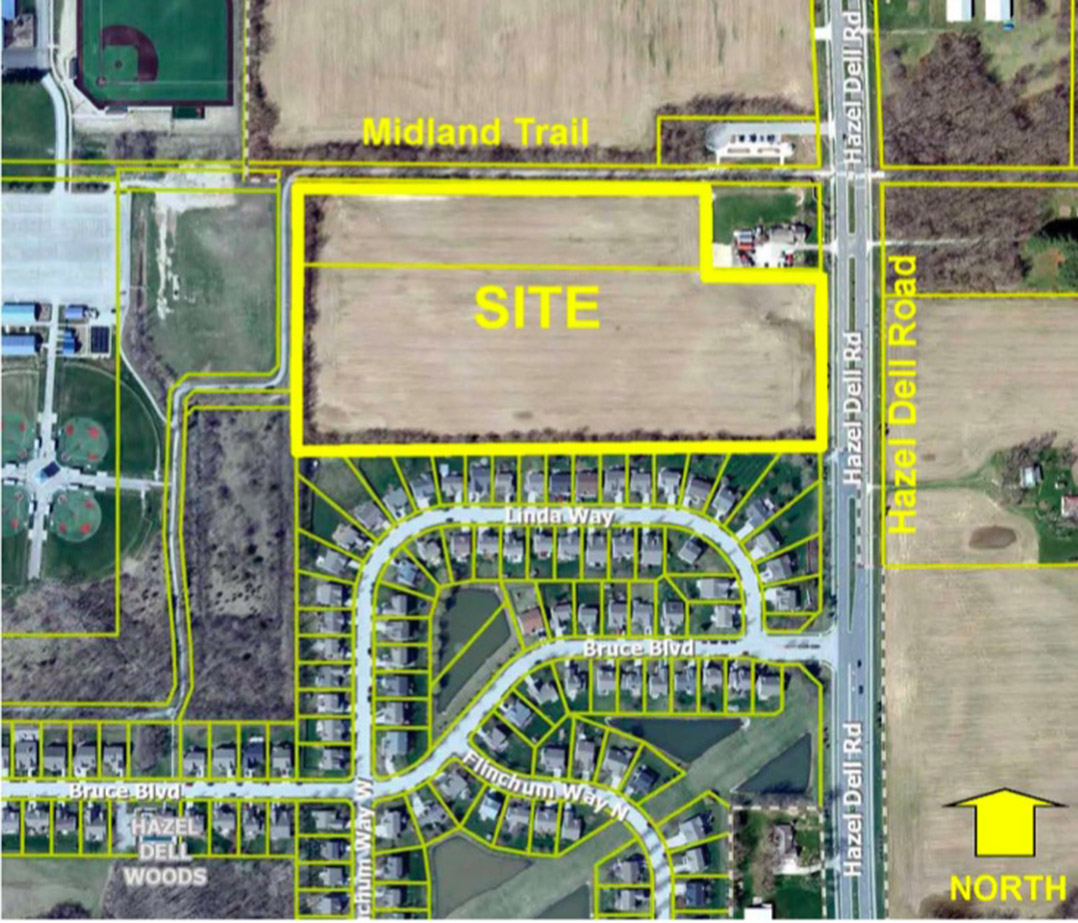 What happened: Council heard an introduction for a rezone request by Olthof Homes from low density to multi-family residential on 17 acres at the Midland Trace Trail and Hazel Dell Road.

What it means: The request is for a change of zoning to allow for 120 single-family attached, for-sale townhomes called Holland Meadows. The proposal was originally presented in September 2021, but after the council requested changes to the site plan and architecture requirements, the proposal was withdrawn, and a revised request was presented at the May 10 council meeting. The proposal includes 6 acres of green space, a dog park, a central park, pathways, two entrances to the Midland Trace Trail, an art feature and a 6-foot wooden fence to screen the development from the Hazel Dell Woods neighborhood near the southern property line. Some council members expressed concern regarding architectural standards and suggested the addition of a fire pit and seating area. The council did not vote because the request was only an introduction.

What happened: The council heard an introduction for an amendment to the Pebble Brook Planned Development Ordinance to allow for a veterinary hospital.

What it means: Noah’s Animal Hospital is proposing an animal hospital at 5691 Pebble Village Lane. It would replace the clinic’s Carmel location at 146th Street and Carey Road, as Noah’s Animal Hospital is renting a house at the Carmel location, and the homeowner has other plans for the property. The proposed Noblesville hospital would offer urgent care services, surgery, vaccinations, recovery and other veterinary services. There would be no kennels or dog runs. If approved, the clinic would be the 13th location. Noah’s Animal Hospital has operated in central Indiana for 35 years. Because it was only an introduction, the council did not vote on the proposal.

What happened: The council heard an update from Ashley Mulis, president of the city’s urban forestry board.

What it means: Mulis gave an update on the board’s recent projects, such as planting native trees along the White River, planting trees at Noblesville High School and issuing a survey for residents regarding the urban forestry board, formerly known as the tree board. She also presented on the board’s goals, such as increasing Noblesville’s tree canopy from 23 percent to 33 percent in the next 10 years.

Nine candidates vying for three spots on Noblesville Township Board