You are at:Home»Current in Carmel»Carmel Community»Carmel comedian goes in circles to help Cancer Support Community

Even though Dave Dugan was going around in circles for hours, surprisingly he didn’t get dizzy.

“That, in spite of the fact that some days I wake up dizzy,” Dugan said.

The Carmel comedian drove 1,001 laps in 4 hours and 29 minutes May 11 around the Jackson Circle roundabout at Horseferry Road in Carmel’s Village of WestClay to raise money for Cancer Support Community Indiana.

Dugan said he was constantly leaning left on the drive. 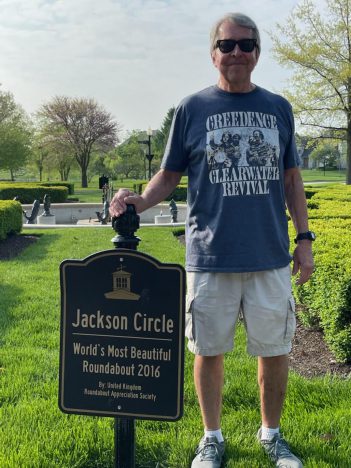 Dave Dugan pauses by the Jackson Circle roundabout sign in the Village of WestClay. (Photo courtesy of Dave Dugan)

“So, to even out the discomfort, I would sometimes force myself to lean right, which I believe officially defines me as an independent,” he said.

Dugan said it should be a record for time spent in a roundabout. The previous record was 4 hours and 52 seconds set in 2018 by Australian Daniel Bird in Townsville, Queensland. Recordsetter.com will need to confirm Dugan’s achievement through a video that was taken. Guinness World Records doesn’t have a roundabout category.

The cause Dugan raised money for, Cancer Support Community Indiana, is a nonprofit supporting cancer survivors and their families in central Indiana.

In 2018, Dugan coordinated his laps around a roundabout with the same nonprofit. When he completed more than 700 laps around the same roundabout, he discovered there wasn’t a world record organization that recognized laps.

So, this time he pursued an existing record of time spent traveling a roundabout.

“I beat the record by 28 minutes,” Dugan said. “As far as comparing the two journeys, in spite of today’s being one hour and 19 minutes longer than the previous (journey) and with far more traffic to contend with than the one four years ago, this one felt in some ways easier.”

Dugan said one of his favorite things about long drives is to be able to think creatively and to listen to music.

“I had a bodacious playlist, and today it dictated a lot of my thoughts,” he said. “In addition to some of my favorite music, I was further inspired by songs I selected for the list that were favorites of some of my favorite close people in my life who passed away due to cancer. The inspiration that transpired when these songs came on was pretty amazing.”

Dugan isn’t sure how many donations were received because of his mission.

“It sounds vague to say the roundabout quest assisted in raising thousands of dollars, but being a bit of a drama queen, I’ll go with that,” he said.

Dugan has no plans for another roundabout record quest.

“Today was a remarkable experience on many levels and I’ll treasure it forever, but I have no plans of doing it again,” Dugan said. “However, if the good folks from Cancer Support Community would request it to happen again in the future, I’m sure I’d do it in a heartbeat.”