You are at:Home»Current in Carmel»Carmel Community»Carmel man’s Basic Utility Vehicle business makes a difference for farmers in Cameroon

Will Austin’s nonprofit designs farm-to-market vehicles called a Basic Utility Vehicle, which are being used to assist farmers around the world.

The BUVs are powered by diesel engines, which come from an Indianapolis distributor. The company works with Cameroon entrepreneur Silas Nfor.

“Silas bought one second-hand from a missionary more than five years ago,” said Austin, a Carmel resident and BUV executive director. “We started getting in touch. He was making money with the vehicle. We love to help entrepreneurs. We want to help him expand his business because he is really helping the small farmers.”

Austin said more than 35 percent of the crops spoil if they don’t get to the market quickly. The BUVs travel approximately 20 mph. 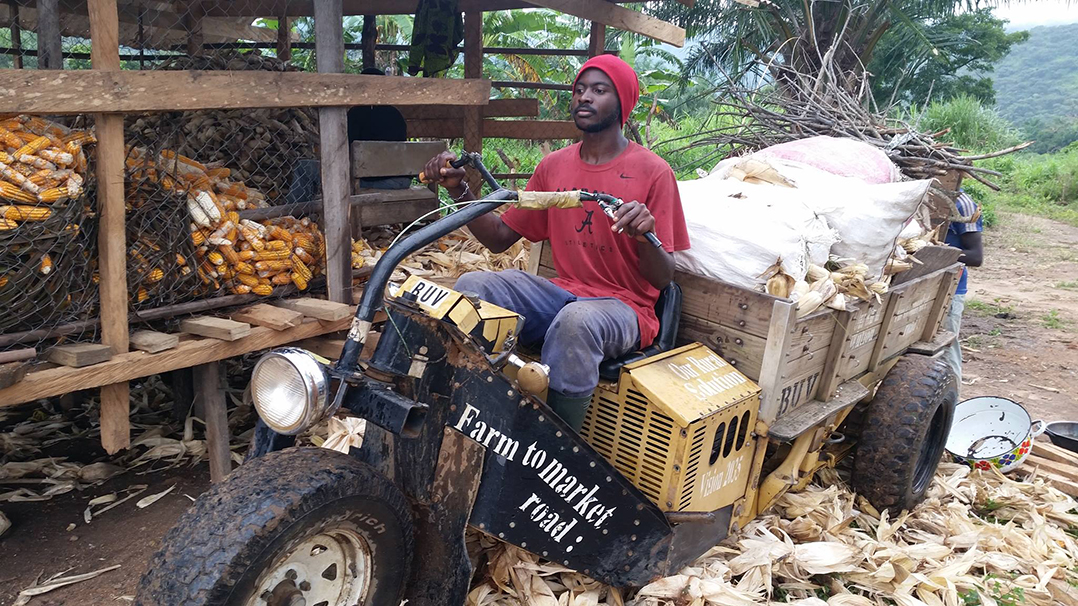 Basic Utility Vehicles are being used to transport food from farms to the market in Cameroon. (Photo courtesy of Will Austin)

“Silas is allowing them to sell their stuff and improve their standard of living,” Austin said. “It’s been a blessing, and we’re excited to be working with him.”

Austin said BUVs are not fast, but they can carry big loads.

“A lot of times they are traveling where there are no roads at all,” Austin said. “The villagers end up walking on the path. They carry crops on their end. Silas can carry 1,500 pounds in his vehicle.”

Nfor said it would take 10 people to make six or seven trips to carry what the BUV can transport. The people often carry the load on their heads.

Farm produce, such as corn, beans and coffee, are the main products for transport.

Nfor said he purchased two different BUVs, one from 2008 and 2011, and from two missionaries, with hopes to repair one of the vehicles. Nfor has spent seven weeks in the U.S. to get training to build and maintain the vehicles.

“I hope in the near future we can start manufacturing them at home,” Nfor said. “I’ve been visiting farms to bring back knowledge to help my people.”

Nfor also serves as a water consultant to help bring clean water filtration systems to his country. Nfor visited ECHO Global Farm in N. Fort Myers, Fla., on a training mission for his demonstration farm. Nfor said he is seeking knowledge to help his fellow citizens get a better yield from their farm.

“Silas helped finalize a sale of four BUVs to Central Africa,” Austin said. “Silas has invited four mayors in Cameroon to come to Indiana this fall. He hopes to set up a sister city arrangement with farming towns around Indianapolis, Austin said Kohler Engine Corporation plans to give BUV a special discount.

“Silas may be the first to benefit from this program, as the financing for three of Silas’s four new BUVs has been underwritten during his U.S. visit,” Austin said.

“If we had to do this by motorcycle, it would be three or four times to carry the produce,” Nfor said. “It uses less fuel because it’s running on diesel.”

The Institute for Affordable Transportation is hosting a swap meet/open house June 18 at BUV, 4930 Emco Dr. Indianapolis, to help raise money. Each spot will cost $10 to sell the vendors’ war. Email will.austin@driveBUV.org to purchase spots.