Yameen Hameed’s ultimate goal is to be a writer for TV or films.

The 2012 Carmel High School graduate has been getting valuable experience in that direction with his position in the Television Academy Foundation’s prestigious paid internship program. Hameed is one of seven students chosen from across the nation for the spring 2022 program, which runs until the end of June. 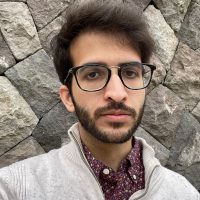 Through the program, Hameed began interning remotely in April at Prodigal Entertainment. The Los Angeles-based Prodigal tells stories across television, film, comics, audio and theater and has a first-look deal for TV and film with Warner Media & J.J. Abrams’ Bad Robot Productions.

Hameed recently graduated from Chapman University, a private research university in Orange, Calif., with a master’s degree in TV writing and producing.

“What’s great is I graduated, and this program goes on until the end of the month,” Hameed said. “I’m not stuck wondering what to do next. I feel some stability and not feeling directionless. The people I work with are really supportive. I feel like I’m getting a lot of good firsthand experience, that’s the big thing. I’m helping the production company out with different daily responsibilities. It’s a nice look into the creative process beyond what we can get in our classes.”

Hameed said the internship serves as a development program with his direction for scripted TV. He is examining different projects that are being sent in for TV or film.

“It’s more like the planning stages most of the time,” Hameed said.

Hameed said the internship is helping him gain more perspective and connections. He said the entry-level jobs he is seeking are with smaller production companies, like Prodigal Entertainment, or potentially bigger networks or studios.

“I’m aiming for an assistantship now, but down the line I do want to work my way to a writers’ room,” Hameed said. “So, I could help out with ongoing scripts and get my foot in the door to finally write my own scripts for TV. There is no real clear set path, that’s part of the struggle. It’s trying to find a way to make it work.”

Hameed said there is more content now with all the streaming services.

“A lot of the shows get canceled quickly,” Hameed said. “In a lot of ways, it’s getting better and more accessible. There are still complications.”

Although the internship is low stress, Hameed is getting insight on what some responsibilities look like.

“It’s the practical aspect of seeing how this works,” said Hameed, who added he feels fortunate to have the opportunity.

Hameed’s thesis for Chapman was about writing pilot scripts.

At CHS, Hameed worked on the school newspaper and debate team while taking several advanced placement classes. He majored in cognitive science at Indiana University.

“It was interesting to learn about, but when I was in college, I realized I did want to write,” he said. “I knew down the line I could learn more about filmmaking and writing. But being in college would give me the unique chance to learn something new in the academic sense.”

Hameed had a creative writing minor, so he learned more about how to write for film.

“But I gained a lot of skills in graduate school,” Hameed said.