Abigail Judy is finding a lot to like about her first Young Artists Program experience with Civic Theatre.

“What I love most is getting the opportunity to work with such great directors and meeting new people,” said Judy, who will be a Carmel High School junior in August.

The YAP’s “REVUE!” is set for 6 and 8 p.m. June 28 at the Studio Theater at the Center for the Performing Arts in Carmel.

“My favorite number that I’ve learned so far is ‘Holding Out for a Hero,’” Judy said. “The music is super fun and we do a lot of really great harmonies. The people in this number are super fun to work with and I think it will be one to the best.” 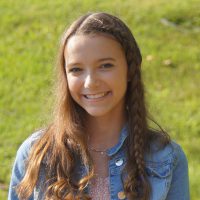 One challenge is learning the numbers when rehearsals didn’t start until earlier this month.

“It takes a lot of hard work and commitment to learn everything and put it all together in such a short amount of time,” she said.

Anne Beck serves as YAP director. Johnna Tavianini is the music director and Kenny Shepard is the director. All three are Ball State University colleagues.

“Kenny and Johnna are a power couple when it comes to putting this show together,” Beck said. “They are both a wealth of knowledge of musical theater songs from all kinds of shows. They always put together an amazing mix of songs people know along with ones not so well known to educate the audience and enlighten us with great material not as well known.

“This year they did again and Johnna also has put together some fabulous mash-ups. She is extraordinary at that.”

Beck said there is an array of soloists in this year’s cast of 13.

“So, it is an exciting year for the show chock full of such great talent,” Beck said. 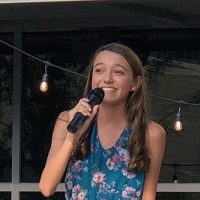 Abigail Judy sings at the Midtown’s Got Talent competition in Carmel. (Photo courtesy of Abigail Judy)

Tavianini said Shepard came up with creative questions for cast members based on some overlying, universal themes that all have to do with being teenagers.

“By using their responses, he crafted a personalized script, with the music that we’ve chosen supporting the stories that our cast members are going to share with the audience,” Tavianini said.

This is Tavianini’s second year as music director for “REVUE!”

“This year and last year, I have been just blown away with the work ethic of the young cast and am immensely proud to see the steady growth in each of them as performers,” Tavianini said. “I love being able to set the bar high and getting to take them all by the hand and help them get there.”

Tavianini said part of her job as music director is to make sure that all cast members sing music that supports their stories.

“I love writing the arrangements and personalizing the music to serve the group in front of me,” Tavianini said.

Tavianini and Shepard worked together for the first time last year on “REVUE!”

“We are all so lucky to have Johnna on board,” Shepard said. “She really is a genius at making these young artists sound like stars while propelling their unique stories through music.”

Having only 10 rehearsals is a challenge to learn all the songs and monologues, Shepard said.

“Another challenge, which I love, is making sure each artist’s voice is heard and each story is told authentically,” he said. “All 13 of them answered a long list of questions for me, and I took their experiences about social media, dating, family, friendships, bullying and other topics and wrote a script, often using their words verbatim as monologues.”

Shepard said the song “Children Will Listen” from “Into The Woods” is very powerful.

“The lyrics and Johnna’s arrangement work so well to further the stories many of them are telling,” Shepard said. “These performers are very brave sharing personal experiences about racism, dating as a member of the transgender community and being bullied. I respect their honesty and openness more than I can say. The social media section is also an eye-opener to me. These teenagers communicate and validate each other in ways that are so foreign to other generations.”