Indiana veterans from across the state flew to Washington, D.C., May 21 as a part of the 34th Indy Honor Flight. 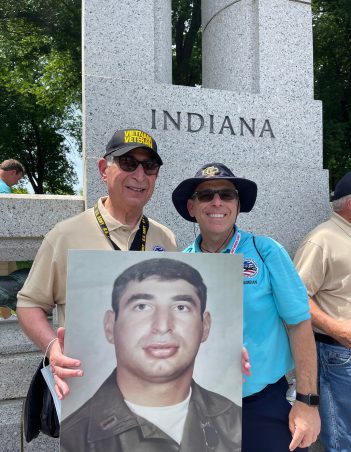 Carmel veterans included Dwight Gossett, Richard Killen, Richard Markoff, Andrew Prather and Michael Seeman. Also on the trip was Gary Lawrence, a Carmel veteran who has been volunteering with Indy Honor Flight since 2012. He was joined by Carmel Fire Dept. Chief David Haboush, who was serving as Markoff’s guardian. The role of the guardian is to assist the veteran during the trip.

Coincidentally, Seeman and Lawrence live in the same neighborhood as Haboush.

“It was a crazy small world (that day),” Haboush said.

The Honor Flight Network was founded in 2005. It provides free trips to Washington, D.C., for veterans from across the U.S. Lawrence said the veterans had a busy day with stops at the Washington Monument and several memorials, including the Lincoln Memorial and Arlington National Cemetery.

Lawrence served in the U.S. Air Force from 1960 to 1966. He spent time in South Korea as an airborne linguist. Since he began volunteering with Indy Honor Flight, Lawrence has dedicated countless hours of his time and energy to the organization.

“This is my passion,” Lawrence said.

Indy Honor Flight offers trips to veterans who served in World War II, Korea and Vietnam. Lawrence combat experience and overseas deployment are not required for qualification. Any veteran is welcome to apply if he or she was in active-duty service during one of those wars.

Indy Honor Flight aims to keep in touch with the veterans even after their one-day trip to Washinton, D.C.

The process of staying connected usually comes in the form of breakfasts and luncheons, Lawrence said. A reunion is scheduled in August to reunite veterans who have been on an Indy Honor Flight.

Flights were canceled in 2020 and 2021 because of the COVID-19 pandemic. Indy Honor Flight No. 33, which took place April 16, was the first flight since the pandemic began.

Lawrence is delighted that flights have resumed.

“I absolutely love what we do for these guys and gals,” Lawrence said.