You are at:Home»Current in Westfield»Westfield Community»Westfield High School runner’s state title one for the books

The magnitude of what Kai Connor accomplished took a while to sink in.

“It was insane because it’s something that I had dreamed of for years,” the 2022 Westfield High School graduate said. “For that goal to be accomplished in a span of less than 2 minutes, it felt like that would have taken so much longer to finally have that happen. The feeling was what’s next. The satisfaction did end up coming a few days after when it did feel a little more real.”

Connor captured the 800 meters in a personal-best time of 1:51.84 at the June 4 IHSAA state boys track and field finals in Bloomington. Connor became the first boys state track champion in WHS history. 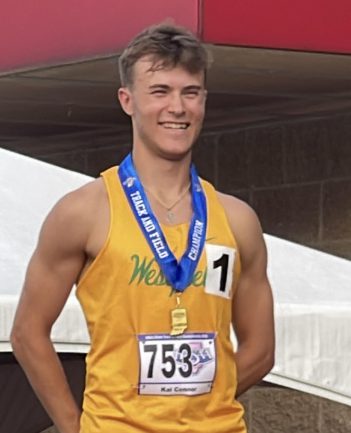 After winning, Connor said he was focused on trying to help the Shamrocks get a medal in the 1,600 relay. They ended up placing eighth in that race.

There was another thing keeping Connor from totally enjoying the moment.

“I felt so sick to my stomach after the race because how tough it was,” he said. “I felt physically and emotionally drained for at least 20 minutes. But then I had to get right back to things.”

The occasion marked the first time Connor made it to state in the 800 meters, missing out by one spot in 2021

“It was tough going into this because I had never run (an individual) event before,” said Connor, who ran in the 3,200 relay at the 2021 state meet. “I knew going into that meet that I had been consistent, finishing in the top spot each race. I knew I had what it took to come out on top.”

Connor said he cut his time at each postseason meet, having previously won sectional and regional tittles.

“I peaked right when I needed to. It was perfect timing on that plan,” he said.

Connor, who also competed in cross country for the Shamrocks, will compete in both sports at the University of Alabama. Connor chose to walk on at Alabama because of its excellent facilities and program. His goal is to earn scholarship money as his career progresses.