“The decision to open a new Carmel store was a compilation of different forces when we made the move to set it up in January. 1832 Brew has been looking to expand for a couple of years,” said Latham Davies, 1832 Brew’s manager. “We were approached by the proprietor of Sub Zero Nitrogen Ice Cream early in the year to develop what is now a strategic partnership between the two companies.” 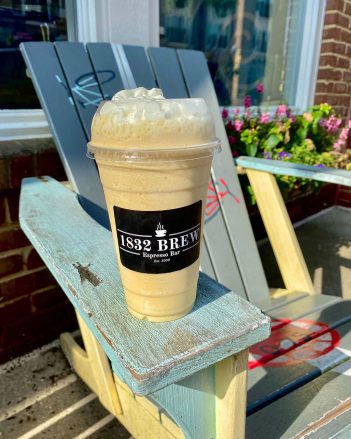 1832’s first store was opened in 2009 by Ashley and Logan Kemp on the campus of Wabash College in Crawfordsville in the Lilly Library.

“Wabash for a long time has offered 1832 Brew a bespoke space in exchange for easy catering for college events,” Davies said. “This relationship is so close that Wabash is the reason for the company’s namesake, 1832 being the year the college was founded.”

Davies said the Carmel 1832 Brew is an independent entity from Sub Zero. It has its own area in the store and uses its own ordering system to serve customers. He said the benefit of having it that way is “good for a few reasons.”

“Firstly, ice cream and coffee go together, but you should be able to get one without waiting in line for the other. Secondly, the two stores operate on a schedule that maximizes the use of our storefront,” he said. “You can get coffee in the morning, ice cream at night, and both during the daytime and evening.”

The uniqueness of 1832 Brew is its menu.

“We love experimenting, but we also like the traditional espresso lineup. We offer everything from a lavender latte, a tart cherry energy drink, to a butterscotch Italian soda that we mix in house,” Davies said. “We have milk alternatives, 15-plus different flavors in any coffee of your choice, and ultimately skilled baristas that can open up the menu for you to get you what you think is good. If you’d like a half-caf, large, oat milk, sugar-free white chocolate iced latte with cold foam, we can do it.”

Davies said 1832 Brews is excited to introduce signature recipes in the next few weeks.

“A sneak peek: a salted mocha, lemonade guava energized refresher and a honey latte may describe a few of them,” he said. “In terms of food complements, we serve yogurt muffins everyday as well as protein bars that we get locally that perfectly compliment a cup of coffee.”

As for competing with existing coffee shops in Carmel and the surrounding areas, Davies isn’t worried.

“1832 Brew’s edge, per se, has less to do with competition but more with catering to a community that loves good coffee and has a sophisticated taste,” he said. “We have been sourcing our coffee for years from a local roaster in Zionsville, Julian Coffee Roasters, who stands by a great business model based on charity and bold coffee selection. Coffee shouldn’t be crazy expensive. Coffee shouldn’t be complicated. Coffee should be what you’re used to, and it should be good no matter if it’s espresso or drip. That’s the 1832 ethos, drink good coffee.”

1832 Brew will also take its offerings on the road.

“In terms of the mobile coffee bar, Carmel can expect our eventual appearance at the farmer’s market as well as other local events,” Davies said. “Things are in the works.”