The Benjamin Harrison YMCA recently celebrated 25 years in the City of Lawrence.

“We truly try to make the Y accessible for all,” Center Executive and East District Vice President Jenny Sera said.

Sera has been with the nonprofit YMCA of Greater Indianapolis for two decades; however, she started working for the YMCA as a teenager, giving swim lessons at the Cass County Family YMCA in Logansport.

Just as Sera has been involved with the YMCA community through much of her life, she said what makes the Benjamin Harrison YMCA — 5736 Lee Rd. in Lawrence — special is its history of providing services for everyone. She said the center has services for people ranging in age from 6 to 90.

“We are truly a cradle-to-grave organization,” Sera said. 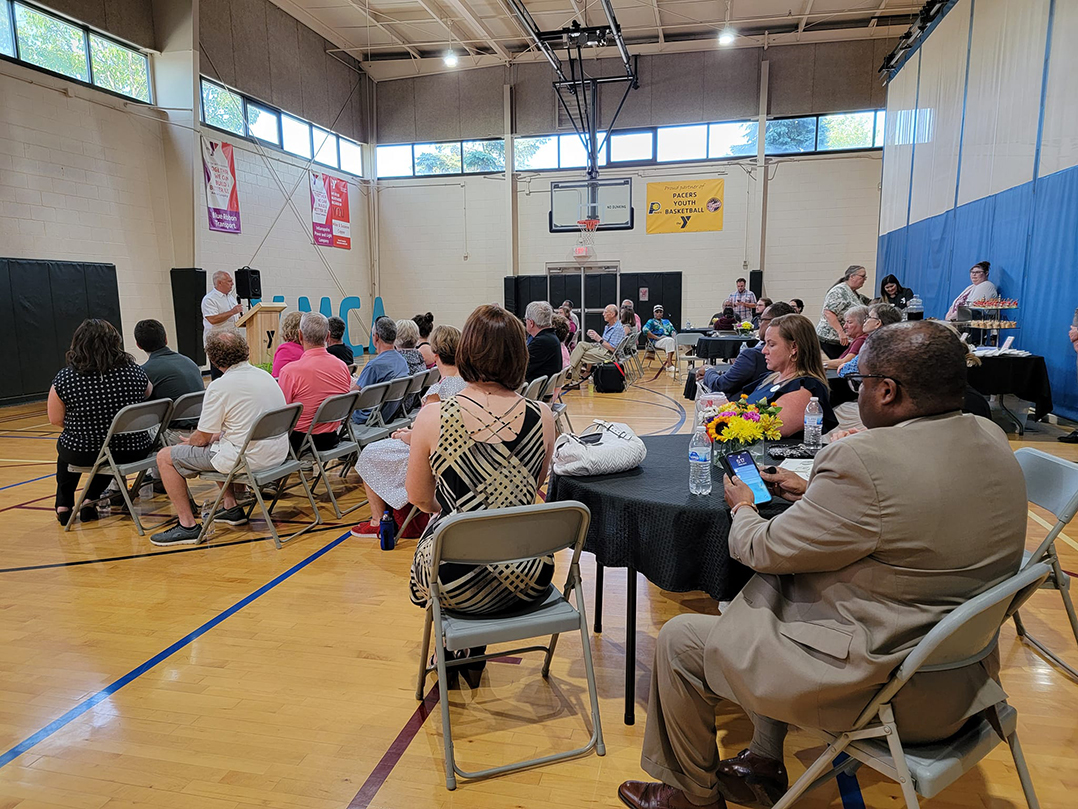 Center Advisory Board Chair Tim Martin speaks to attendees during a celebration for the Benjamin Harrison YMCA. (Photo courtesy of Tony Wise)

As part of the 25th anniversary commemoration, the Benjamin Harrison YMCA will have a Summer Bash fundraiser at 6 p.m. Aug. 18 at Daniel’s Vineyard in McCordsville. More details will be announced as they become available.

Since its opening, Sera said the Benjamin Harrison YMCA has strived to provide a range of services for Lawrence residents. She said the center will serve more than 20,000 people this year.

Even during the pandemic, Sera said the YMCA found ways to assist the community, such as providing child care to essential workers.

Child care is only one of many services offered by the Benjamin Harrison YMCA. It also offers a variety of organized youth sports and camps. Swim lessons are available for members of all ages, and adults can also sign up for a variety of fitness and cardio classes.

Kevin Carroll, who served in the U.S. military and was stationed at Fort Benjamin Harrison before it was decommissioned in 1991, has been a member of the Benjamin Harrison YMCA since it opened. He has participated in just about every activity it offers, from aerobics classes to cycling classes.

“Over the years, I’ve done all of it,” Carroll said.

Carroll said his wife enjoys the classes, too. The couple appreciates the quality of the programs and the people who run them.

“Jenny’s staff is amazing,” Carroll said. “It’s a (professional) feeling-type thing.’ The people there make you feel comfortable walking in the door.”

Despite its longevity, Sera said the Benjamin Harrison YMCA faces some challenges, specifically with regard to staffing. She said 90 percent of the staff are part-time employees, the center is experiencing a lifeguard shortage.

Looking ahead to the next 25 years, Sera’s hope is that the Benjamin Harrison YMCA continues to remain a safe space for kids and a place where the community can come together. She said she wants the facility to extend its reach, helping as many as possible along the way.

“We care about the community and the people we serve,” she said.

For more on the Benjamin Harrison YMCA, visit indymca.org/benjamin-harrison/center-info/.