You are at:Home»Current in Geist»Geist Cover Stories»Lights, camera, back in action?: Lawrence Police Dept. pondering return to reality TV

It’s been two years since the Lawrence Police Dept. was featured on the reality show, “Live PD.” The department was one of 50 across the U.S. to participate and was featured for 98 episodes between 2018 and 2020.

“A supervising producer for ‘Live PD’ had formerly worked at Fox 59 here in Indy and still had friends in the newsroom there,” LPD Chief Gary Woodruff said. “When the producers of ‘Live PD’ were interested in coming to the Indy area, they connected the ‘Live PD’ producers with us.”

Participating in the show was an honor for the LPD, Woodruff said. 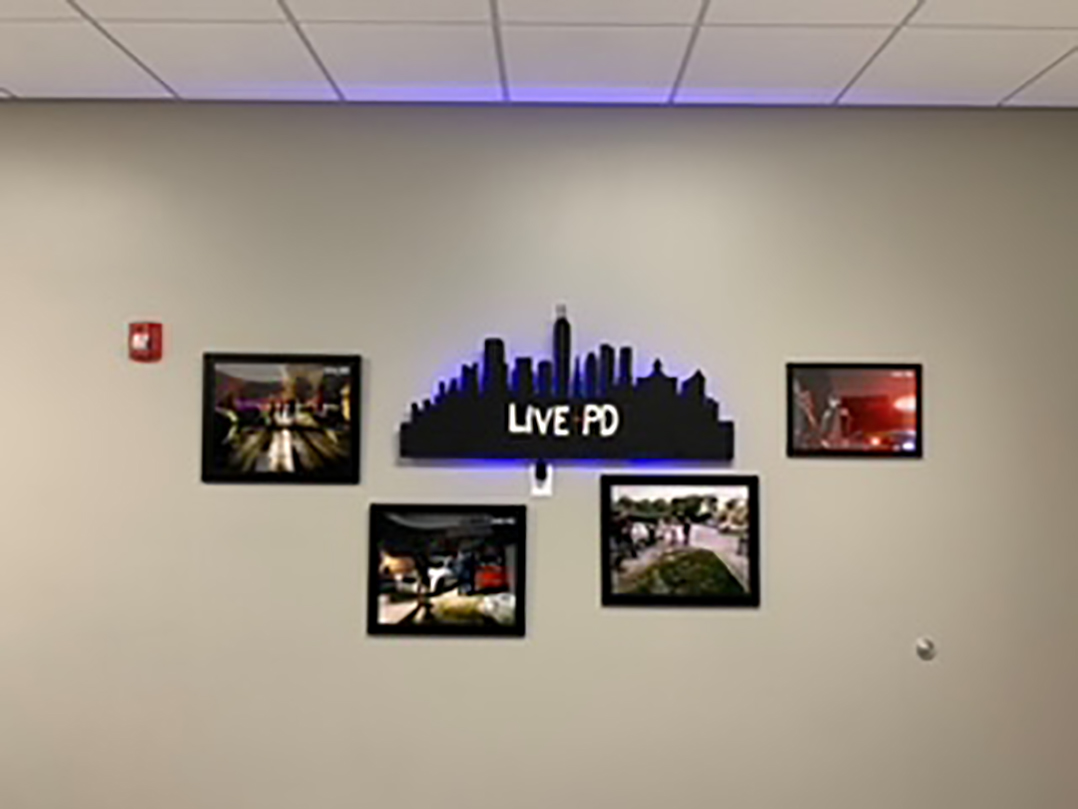 The Lawrence Police Dept. was featured in 98 episodes of “Live PD.” (Photos courtesy of LPD.)

“The show depicted the outstanding work being done by police officers in communities across the U.S., including right here at home in Lawrence offering an unfiltered view of the realities law enforcement agencies across the U.S. contend with every day and night,” he said. “’Live PD’ viewers got to ride along with our officers every Friday and Saturday night for three hours, with a front row seat to how officers respond to assisting citizens and incidents in every community.”

Now the department has again been approached about participating in a new reality show with a similar format – “On Patrol: Live.”

“We’re excited for the return of a show of this format back to television. Clearly there is a strong viewer following for this kind of show, as ‘Live PD’ was exceedingly popular,” Woodruff said. “LPD is open to discussing our potential participation in the new show. We’re honored to be considered for participation in a documentary show focused on the telling of the story of policing in America.”

David Hoffman, chief of staff for Lawrence Mayor Steve Collier, was the LPD chief when the department took part in “Live PD.” He believes the fact the city has been approached again shows that producers and viewers were impressed by what they saw.

“(They saw) that the men and women of the Lawrence Police Department are well-trained, fair, compassionate people with common sense doing a difficult job under a variety of tense circumstances and they are doing it right. Our image and reputation are ones of professionalism in policing,” Hoffman said. “LPD officers represent what is best in law enforcement and the people who invited us back clearly know that and want to highlight them for the nation to see.”

It’s also a great reflection on the city and the department, Hoffman said.

“Lawrence police officers pride themselves as being very much a part of the fabric of Lawrence.,” he said. “They are not merely protectors or armed guards who separate themselves from our citizens. They have the mentality of guardians who work together with our citizenry. Our officers spend time in our schools, businesses, churches and countless community events throughout the year. They are honest, good-hearted people, just like the vast majority of the people they serve. Many of our officers are parents with families. They are patient and empathetic. This was so apparent for the millions of viewers each night on the national stage of ‘Live PD.’

“It was such a shame the show was canceled in the summer of 2020 at the height of its popularity, at a time when Americans needed to see the actual reality of day-to-day policing the most.”

Woodruff believes shows such as “On Patrol: Live” are important.

“Shows such as ‘On Patrol’ offer viewers an authentic, unbiased, real-time perspective of the realities, challenges and responses of how law enforcement officers and agencies interact with the communities they serve, allowing the viewers to form ideas and opinions,” he said. “As overused as this term may be, it applies here: authenticity.”

One feature of the new show would be ride-alongs, something LPD encouraged citizens to do before the COVID-19 so they could gain a realistic perspective on how law enforcement officers perform their duties.

If the department does participate in the new show, Woodruff said there would be parameters.

“Established laws, journalistic integrity standards and basic human decency certainly apply,” he said. “As a for instance, no one would want to find out a loved one had been involved in a potentially life-altering incident on national television. A ride-along with ‘On Patrol: Live’ camera and production crews are no different than any other media ride-along we have conducted over the years.”

There is no timeline yet on when the show will go into production or how many departments will be featured.

“Typically, there were eight to 10 departments featured at any given time during ‘Live PD’s’ tenure,” Woodruff said.

Ultimately, the decision to participate will be based on input from the mayor’s office working in concert with Woodruff and the “rank and file” of the department, Hoffman said.

“Perhaps most importantly, we would solicit feedback from our community, the very citizens we serve, on whether this new format would be a good fit for us, a good platform to showcase our great department and city,” he said. “It will not be a decision taken lightly. Regardless of the direction we choose to go, there will be constant reevaluation and analysis of the risks and rewards or participation”

“On Patrol: Live” is set to premiere this summer and will be broadcast on Friday and Saturday nights from 9 p.m. to midnight on REELZ. Police departments and sheriff’s offices featured on the show will be announced in the coming weeks.