Izzy Casciani is getting a second opportunity to participate in the Songbook Academy.

Casciani, who will be a Zionsville Community High School junior in August, is one of 40 finalists from across the nation selected to participate in the summer intensive set for July 16 to July 23 at the Great American Songbook Foundation’s home at the Center for the Performing Arts in Carmel.

Casciani was selected in 2021 but couldn’t participate because she had the opportunity to portray Roxie Hart in Summer Stock Stage’s production of “Chicago.” 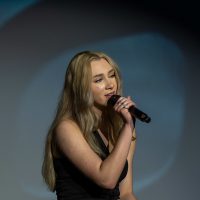 “It was a hard decision, but I had to make that choice,” said Casciani, who added Hart has been her favorite role. “I’ve had my eye on this (Songbook) program for a while. My voice teacher, Jenny Kistner, told me about it and I’ve had friends who have been in it in the past. It’s been on my radar for a while.”

Casciani especially looks forward to the master classes taught by the Broadway professionals.

“I want to soak in as much as I possibly can,” Casciani said. “I know it’s going to be fast paced. I’m excited to try new things. I think it will help grow my musicality. I’m excited to sing classical music because we don’t get to do that a lot at school and other places around here because it’s not really the main focus. I love singing golden age and jazz.”

Casciani is focusing on more jazz songs, such as “Stormy Weather.”

Casciani has been a dancer since she was 3 years old, doing ballet and tap from an early age.

“I do all styles, but my favorite is ballet,” said Casciani, who trains at Village Dance Studio in Zionsville.

Casciani was in Jr. Civic productions when younger.

“I focus on acting but use dancing and singing as tools to tell the story,” Casciani said. “It’s so hard to choose because I love every aspect of it.”

Casciani is in Royalaires, the high school’s mixed show choir. She performed in Stephen Sondheim “Into the Woods,” the school musical in the fall of 2021.

“I like it all, but my heart lies with Sondheim because it’s so genius and the layers of the musical,” she said. “It’s really satisfying to do his work because there is so much you can find within the scripts. It’s cool to dig deeper into the script and find new stuff.”

Casciani plans to major in musical theater in college.

“My sister (Celia, a 2018 ZCHS graduate) danced and was in Zionsville’s show choirs, so I grew up watching her perform,” Casciani said. “She loved doing school musicals, so I tried doing the school musical in fifth grade and loved it so much. My voice teacher got me involved in Christian Youth Theater.”