You are at:Home»Lifestyle»55 and Better»Book details Cambodia’s involvement in Vietnam

Terence McCarthy wanted to make sure the entire truth about the North Vietnamese communists and Cambodia’s involvement was revealed.

The Carmel resident’s book, “The Real Story: Cambodia and South Vietnam 1953-1970,” was released in late May. 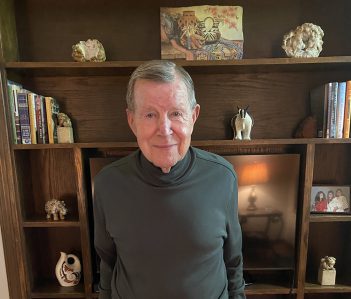 McCarthy, 87, was in the U.S. Army and while serving in Vietnam was assigned to develop intelligence about the Vietnamese communists’ movement in Cambodia, which had officially declared itself a neutral nation during the Vietnam War. McCarthy arrived as a major in Saigon in August 1968.

“In 40 days, I was able to develop an entire intelligence breakthrough on the Cambodian support of the communist forces,” said McCarthy, who goes by F. Terence McCarthy as author. His first name is Frank, but he goes by Terence.

Cambodia had made an agreement with the communists in China, McCarthy said. China provided freighters, which delivered arms and ammunition to a port on the far west side of Cambodia.

“I sent a full report to the Pentagon, which declared beyond a doubt there was no way the communist forces in southern Vietnam could be resupplied because we had shut all those other ways down,” McCarthy said. “They failed to take any action on restrictions and keeping U.S. forces from initiating tactical excursions into Cambodia. (The Pentagon) sent a two-person intelligence team from Washington to shut this brash major (McCarthy) down. They failed to convey this information to President (Richard) Nixon.”

McCarthy was then moved to the Army staff in Washington, D.C., in the fall of 1969. He said Gen. William Westmoreland, who was Chief of Staff of the U.S. Army, supported McCarthy’s investigation.

McCarthy put together a 604-page study that was classified “top secret sensitive.” Westmoreland scheduled an appointment in November 1970 at the White House, where McCarthy briefed President Nixon’s Foreign Intelligence Advisory Board on the information he had developed. Nixon accepted the findings and the engagement policy changed.

“This helped us significantly,” McCarthy said. “The basic problem we had in 1968 in southern South Vietnam fighting the communists is they established base areas in Cambodia, and they used this to jump off and make attacks against our U.S. forces. We had a restriction (that) we could not initiate any tactical activities in the base areas (in Cambodia). They attacked our troops and then ran back into Cambodia.

“The only thing we could do is mount a quick pursuit attack before they got across the border. This was not easy.”

McCarthy estimated the U.S. lost approximately 1,000 American soldiers and another 2,000 wounded because of not reacting to his initial report in the fall of 1968.

“Had the U.S. reacted in a responsible way on this intelligence, I believe that many American servicemen would not have been killed and many more would not have received serious wounds they received from the Vietnamese communists who were using Cambodian base areas to launch offensive operations,” McCarthy said. “It was a complete horrible problem that put us in an extraordinarily frustrating situation where we couldn’t really respond. That affected the morale of the American forces in Vietnam considerably.”

McCarthy said the intelligence helped get the policy changed after the presentation.

“It saved a huge number of American lives,” McCarthy said.

McCarthy’s book documents in great detail all of the activities.

McCarthy, whose final rank was lieutenant colonel, worked to get the information declassified approximately three years ago. It details all the actions in 1968 to 1970.

“This is going to be all news to the American public,” said McCarthy, who retired in 1979 after 20 years in the Army.

McCarthy and his wife, Teresa, moved to Indiana four years ago to be closer to one of their daughters.

“Trying to live in the Washington. D.C., area on a retired military pension was not a winner at all,” he said.

The 94-page book, which was published by Westwood Books Publishing, is available on Amazon. For those who want to buy a signed copy for $18, email McCarthy at tandtmccarthy@aol,com.