You are at:Home»Current in Carmel»Carmel Community»Carmel Libertarian Maurer aims to ‘transform Indiana politics’ through secretary of state bid

It’s been more than 175 years since Indiana voters elected someone other than a Democrat or Republican to be secretary of state, but Jeff Maurer of Carmel is seeking to end that drought this year.

If elected on Nov. 8, Maurer, a Libertarian, would become the first candidate to hold the office from outside the two currently dominant parties since John H. Thompson, a Whig who served from 1845 to 1849. 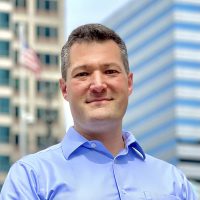 Maurer knows his campaign will be an uphill battle, but he believes victory is achievable. He pointed to the 2020 gubernatorial race as a sign that political momentum is swinging in his party’s favor, as Libertarian candidate Donald Rainwater earned 11 percent of the vote and finished in second place behind incumbent Republican Eric Holcomb in a third of Indiana counties.

“If I’m able to repeat Donald Rainwater’s success in my race, we’ll truly transform Indiana politics, because that center of power will shift and we’ll be able to hold both Democrats and Republicans accountable in a way neither has been doing currently,” Maurer said.

Maurer said a Libertarian in office would naturally lead to more diplomatic solutions, as he would be primarily working with those outside of his party. There are other benefits, too, he said.

“I’m not beholden to a larger party that can only stray so far from national dogma or party bosses, so I’m empowered to have original ideas,” he said.

Among Maurer’s campaign issues is improving trust in the election process by providing voters with a receipt that can be used to verify a vote was received, counted and audited.

“Elections are an article of faith. They are a matter of confidence and trust,” Maurer said. “At the end of the day, we want everyone to walk away with proof or some kind of certainty that their vote has been counted, their voice has been heard and they are enfranchised in our democratic republic.”

He is also in support of independently auditing all counties after an election and only certifying the results once the audit is complete, implementing recall elections to improve accountability, increasing referenda ballot initiatives to give voters are more direct say in issues such as abortion and marijuana legalization, and rank choice voting, which allows voters to rank their preference for candidates running for an office.

“It removes the binary do-or-die component of our current election process,” Maurer said.

In addition to elections, the secretary of state’s office is responsible for business registration. Maurer would like to make the process – and small business support services – more efficient so business owners can focus on their customers.

Maurer, 40, grew up in New York City in what he described as a “big Democrat family.”  He previously voted that way, too.

“It was through frustration with broken promises and – ultimately – tremendous, obscene corruption that disillusioned me,” he said. “The best solution for me is limited government that can be less corrupt. The bigger the government, the more corrupt it gets.”

Maurer said he and his ex-wife could have relocated anywhere when they decided to move out of Manhattan, but they chose Indianapolis because of the low cost of living and better quality of life. He became familiar with the city while visiting his former college roommate there.

The Maurers moved to Broad Ripple in 2013 but relocated a year later to Home Place, which has since been annexed by Carmel. Maurer serves on the Carmel Economic Development Commission, the Home Place Advisory Board and on his homeowners association board.

Maurer has a degree in business administration from Washington University in St. Louis. He has worked in marketing, finance, customer service and green tech. He’s also been an entrepreneur, launching a virtual reality company. Currently he works as a development officer for Students for Liberty, a nonprofit that promotes free markets and free speech around the world.