You are at:Home»Current in Geist»Geist Community»Hofmann announces candidacy for Lawrence mayor

Lawrence Deputy Mayor Dave Hofmann, a Republican, announced Sept. 22 that he plans to run for mayor of the City of Lawrence. The announcement comes a few days after current after incumbent Steve Collier, also a Republican, said he won’t seek reelection in 2023. 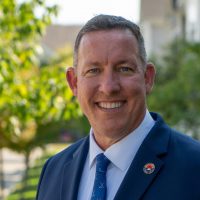 Before serving as deputy mayor, Hofmann was appointed as chief of staff for the City of Lawrence in March 2022. Prior to that, he served six years as chief of the Lawrence Police Dept. He is a Lawrence resident and has lived in the city for more than 25 years.