The City of Fishers approved two-thirds of a $1.1 billion economic development plan Sept. 19. Andretti Global, Stevanato Group and the expansion of the Fishers District were all topics of conversation at the Sept. 19 City Council meeting. Both the Andretti Global and the Stevanato Group projects were approved and will move forward with construction.

The new event center and expansion of the Fishers District east of Interstate 69 had a first reading and will be brought up again at the next city council meeting sometime in October. Before it goes back to council, a public hearing will be held Oct. 6 to discuss funding the event center with a 1-percent increase in Fishers’ food and beverage tax.

“This really is a new chapter in the (City) of Fishers,” Mayor Fadness said at the Sept. 19 council meeting. “I couldn’t be prouder of the decisions and the work to date that have put us in the position to be contemplating $1 billion of economic development.” 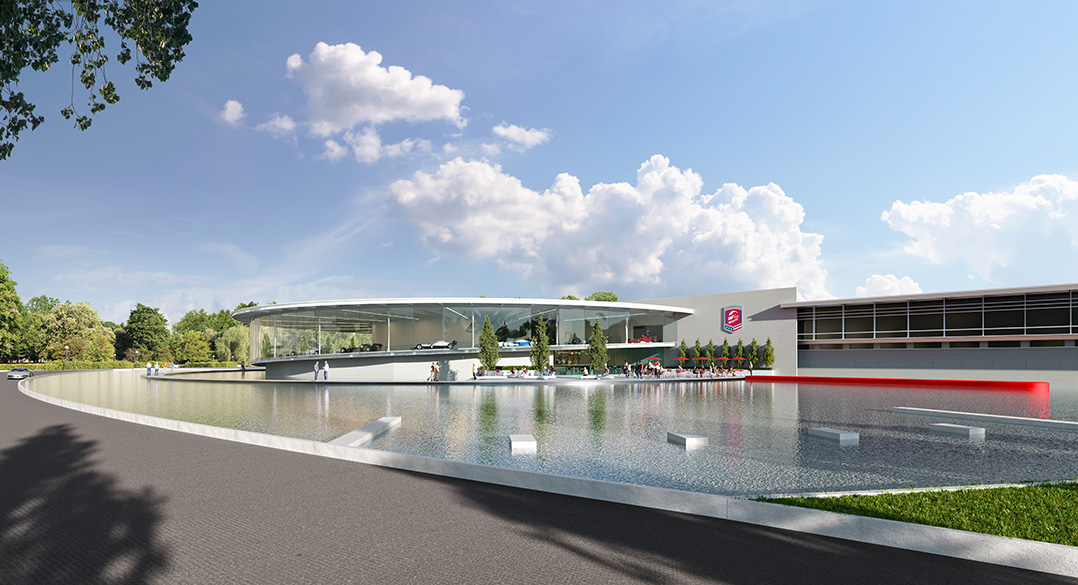 Artist rendering of the new Andretti Global headquarters moving to Fishers. (Renderings provided by the City of Fishers)

Andretti Global, the parent company of Andretti Autosport, announced Aug. 22 that it plans to build a $200 million headquarters in Fishers. The 575,000-square-foot building will be constructed on 99 acres in Fishers near the Nickel Plate Trail Ritchey Woods Nature Preserve and Indianapolis Metropolitan Airport.

It is expected to create up to 600 new jobs by 2026. The projected annual salary for the jobs will be about $100,000 and will create 956 construction jobs during the year of construction, according to city officials

The new building will serve as a headquarters and base of operations for former IndyCar driver Michael Andretti’s racing team’s NTT IndyCar Series, Indy Lights and IMSA programs and future racing programs. It will also house a museum, restaurants and other amenities.

Construction on the project is expected to begin in 2023; be complete by 2024; be operational by 2025; and be completed by the end of 2026. The headquarters will feature modern technologies and will allow Andretti Global to welcome the racing community through involvement with the Fishers Parks Nature First program, planned indoor amphitheater, museum and innovations center that will showcase Andretti’s legacy.

“We’re really truly trying to create that atmosphere along the Nickel Plate Trail for walking paths and top-of-the-line fitness facility and all the top amenities and things to truly have that for (everyone),” Andretti said. “We’re just excited and proud to be a part of it.”

Concerns were raised about the headquarters being placed near Ritchey Woods Nature Preserve. Andretti said the company has plans to work with the City of Fishers Nature First Program to ensure that the property will not be negatively impacted by the project. 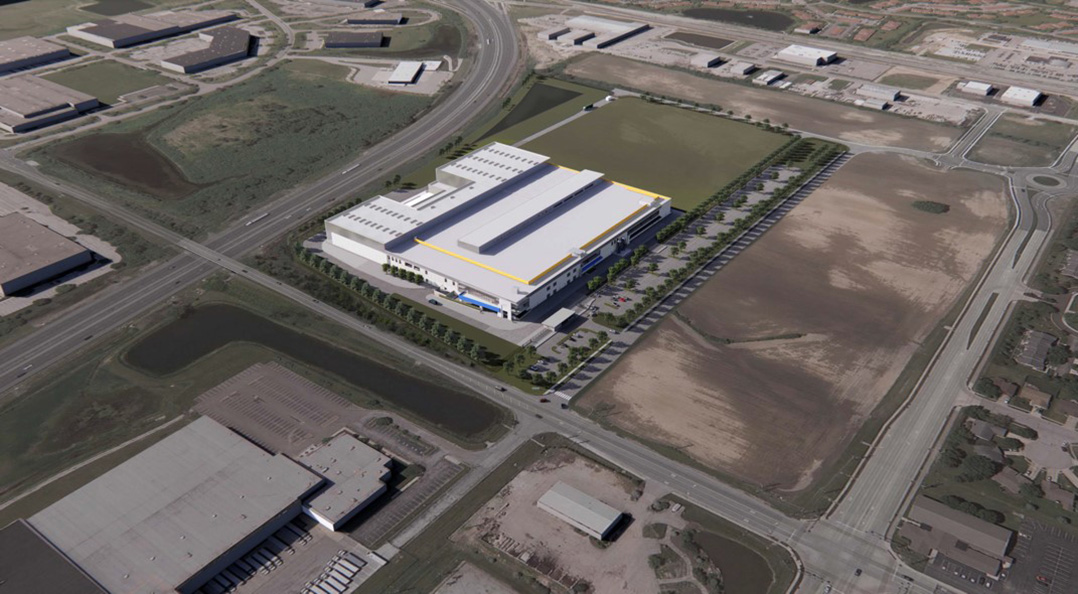 Artist rendering of the Stevanato Group building on Cumberland Road.

The City of Fishers announced Sept. 14 the expansion of the Italian pharmaceutical and biotechnology manufacturing company Stevanato Group. In June 2021, the Stevanato Group announced plans to build a 200,000-square-foot, $140 million facility at the Fishers Life Science and Innovation Park.

Earlier this year, Stevanato executives approached the City of Fishers about expanding the planned facility. The company proposed an investment of $512 million and hire a total of 515 employees by 2031.The project was greenlit by council members at the Sept. 19 city council meeting. Construction on the Stevanto facility has already begun. The company plans to start manufacturing operations in early 2024.

Stevano Group will be creating about 500 new jobs that will pay about $70,000 annually, according to information presented at the Sept. 14 finance meeting.

“We were looking at a couple of different states and then narrowed it down to Indiana, and we were looking at several different areas and evaluated all those areas and determined that Fishers was the best location for the new building,” said Scott Hamm, project manager for the Stevanato Group building. “The thought was this is a growing area where a lot of people are moving to, and with the trajectory of the population growth, we thought it would be good to support the business.”

Hamm also said Italian engineers will relocate to Fishers, so part of the decision was also because of the fact that they believe the city will be a good place to live.

“It’s a safe place to live (and) the cost of living is reasonable here compared to other metropolitan areas, so that’s clearly a factor as well,” Hamm said.

The current plan is to have construction completed by the end of 2023 and start production of smaller items, such as syringes, in early 2024. 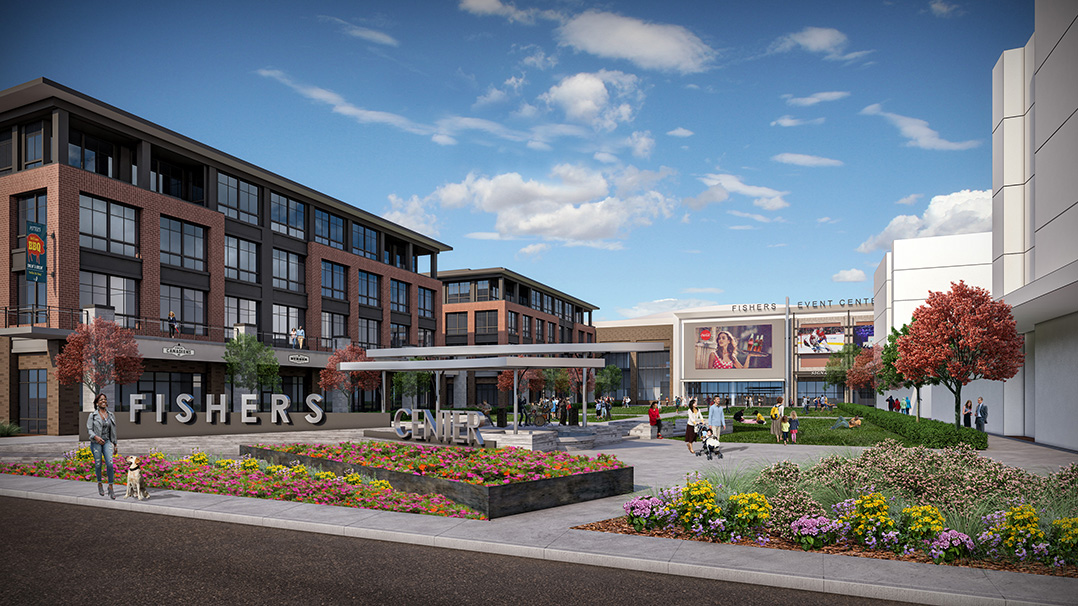 The City of Fishers announced Sept. 14 new economic developments, including a new event center that would grow the Fishers District. The new event center, if approved, would be home to the Indy Fuel minor league hockey team.

The total expansion of the Fishers District is slated to cost $550 million and will be located east of I-69 between 106th and 116th Street, southeast of IKEA. The expansion will also include new retail, restaurant, entertainment and residential businesses.

The district will consist of three major projects. They are:

“Quite frankly, for me to make the investment that I’m making in this community, it’s because of the energy of the mayor and the council that excites me to invest in (Fishers),” Hallett said.

The Indy Fuel, which currently plays in the Indiana Farmers Coliseum at the Indiana State Fairgrounds, practices at the Fuel Tank in Fishers. The team currently has 36 games planned in its first season at the new event center, is projected to host about 125 events a year, according to Fadness

Hamilton Southeastern and Fishers high schools are expected to have their graduation ceremonies at the event center. In recent years, the ceremonies have been at the Indiana State Fairgrounds.

“(The expansion of the Fishers District) is going to be a great asset to help spur economic development in and around this area. It’s going to provide another regional destination entertainment venue,” Boyd said. “It’s just another very unique destination for the city that will give it regional recognition throughout the state of Indiana and continue to put Fisher on the map.” 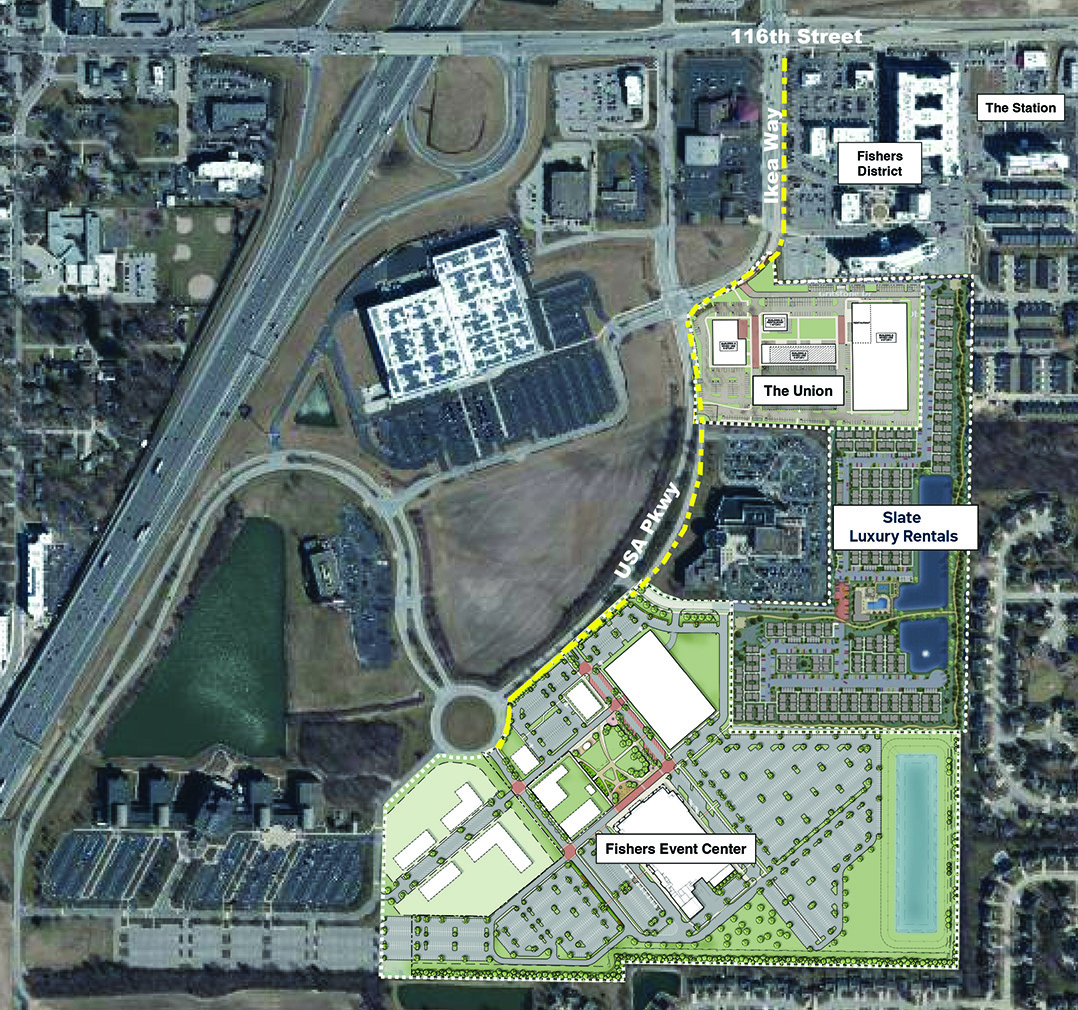 Map of where the expanded Fishers District will sit east of I-69.

The event center, which is a part of the Thompson Thrift expansion of the Fishers District, is the centerpiece of the $550 million project. The event center is expected to cost $320 million.

To pay for the expansion, the City of Fishers has proposed a 1-percent increase in the city’s food and beverage tax. The increase would raise the tax from 8 percent to 9 percent, if the proposal is passed by the Fishers City Council following an Oct. 6 public hearing.

The 1 percent increase would be added to all food and beverage charges in restaurants in Fishers. The increase is estimated to bring in about $3 million for the event center, according to Mayor Scott Fadness. The public hearing on the proposed tax will be at 5 p.m. at the Fishers Police Dept. Training Room at 4 Municipal Dr.