You are at:Home»Current in Zionsville»Zionsville Education»Zionsville school board candidate states on Facebook, “All Nazis weren’t ‘bad”

Zionsville Community Schools Board of Trustees candidate Dr. Matt Keefer has received backlash after making comments on his personal Facebook page last month that stated, “All Nazis weren’t ‘bad.’” The since-deleted comment was in response to a question about defining indoctrination. 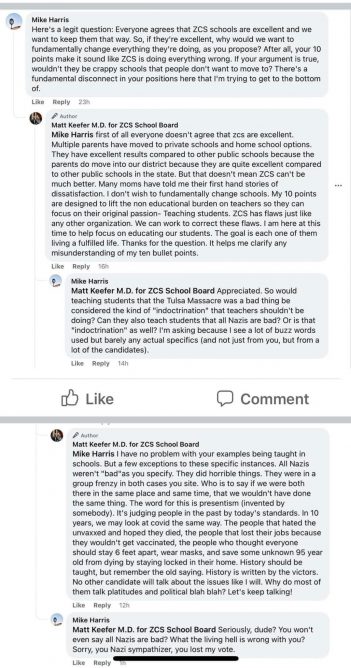 Keefer also stated on Facebook, “Who is to say if we were both there (in Nazi Germany) in the same place and same time, that we wouldn’t have done the same thing … In 10 years, we may look at covid the same way. The people that hated the unvaxxed and hoped they died, the people that lost their jobs because they wouldn’t get vaccinated, the people who thought everyone should stay 6 feet apart, wear masks, and save some unknown 95 year old from dying by staying locked in their home.”

Hilary Heffernan, a parent of students who attend ZCS, said she is disappointed Keefer is running to be a leader in the Zionsville community, and “can’t believe this is happening in 2022.”

“I see a lot of divisiveness and fear-based bullying going on,” Heffernan said. “That’s not the way to get things done. It’s connectedness, communication, being an adult and having an emotional IQ.”

Keefer posted to Facebook Oct. 21 in response to media coverage of his comments.

“A few days ago I made the comment ‘not all Nazis were bad’ in response to a question posed to me on Facebook. I am correct,” stated Keefer in the post, citing sources he said articulated his point.

Keefer then stated that those who did not agree with his statement that “All Nazis weren’t ‘bad’” should research Oskar Schindler, Karl Plagge, George Kalman, or a 1992 study titled “Ordinary Men: Reserve Police Battalion 101 and the Final Solution in Poland.”

“These four sources do a much better job of articulating, some might say proving, my point,” Keefer wrote.

According to Günther Jikeli, a professor in Jewish and Germanic studies at Indiana University and associate director for the Institute for the Study of Contemporary Antisemitism, there were many reasons for people to join the Nazi Party, whether they believed in the ideology, wanted to advance their careers, or otherwise. However, there was no obligation at any time in Germany to join the Nazi Party, and many did not.

“Joining the Nazi Party was an active act in support of the Nazi Party, and therefore its members bear some responsibility for the crimes in the name of that ideology, even if they were not involved in any other activities of the party,” Jikeli stated in an email. “This doesn’t mean that there weren’t a few exceptions who even used the cover of being members of the Nazi Party to do good things. But these were rare individual exceptions.”

With regard to the sources Keefer cited, Jikeli stated, “Karl Plagge opposed the Nazi policy against the Jews and left the Nazi party when the war began. He nevertheless became a staff officer in the German Army and used his position to save Jews.”

Jikeli said Oskar Schindler was a rare exception of someone who used his Nazi Party membership to save Jews.

“The study “Ordinary Men: Reserve Police Battalion 101 and the Final Solution in Poland” by Christopher Browning does not prove Mr. Keefer’s point,” Jikeli stated. “A closer look at the documents from the battalion (instead) shows that many people, in this case, policemen who were tasked to round up working Jewish men and shoot all other Jews in the town of Józefów, did so voluntarily. The commander, Major Trapp, offered his men that they would be excused if they did not feel up for the task.”

“To be clear, I never was, am not now, and never will be a Nazi sympathizer,” Keefer’s Oct. 21 post read.

Rabbi Benjamin Sendrow of Congregation Shaarey Tefilla in Carmel said individuals like Oskar Schindler were rare exceptions, and he believed once Schindler made the decision to help Jews, he was no longer a Nazi.

“I have serious doubts about the thinking of a person who chooses to make the argument that there were decent Nazis,” Sendrow said. “It’s like saying, ‘Well, some slave holders treated their slaves well.’ So what? Why would I make a statement like that, when slavery is the worst moral stain on American history? Why would I want to do anything to lessen the severity and horror of slavery?”

Keefer stated in an email to Current following his comments on Facebook that the school board recently sent a message home with students that condemned him without naming him.

“This seems like it is improper (or illegal) for the school board to weigh in officially on what was innuendo and hearsay,” Keefer stated. “My words were twisted and not in context. For them to suggest and condemn words I never said seems to be influencing an official election.”

Debbie Ungar, president of the ZCS school board, stated in an email, “The assertion that there was any districtwide communication ‘that all of the kids brought home to their parents’ is a complete fabrication.”