You are at:Home»Current in Carmel»Carmel Community»Sagamore of the Wabash presented to doctor, entrepreneur for efforts to benefit first responders 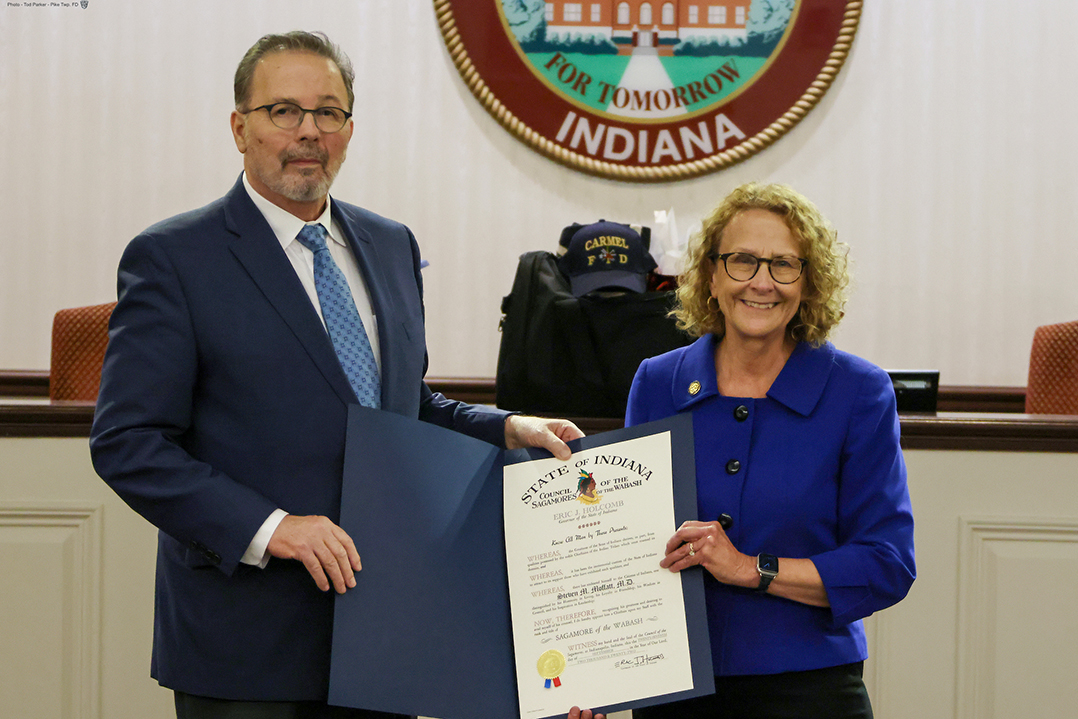 Moffatt received the distinction during a Sept. 27 ceremony at Carmel City Hall. State Rep. Donna Schiabley presented the award on behalf of the governor.

During the next 30 years, the organization grew to serve 250 agencies across Indiana, providing services to approximately 10,000 first responders annually.

“Public Safety Medical became the largest practice of its kind in the U.S. because of our extensive experience,” said Moffatt, a physician with Ascension St. Vincent. “We are seen as a center of excellence providing health programs to first responders and sought out for our best practices by agencies across the country.”

Moffatt believes the dangerous nature of emergency responder jobs, coupled with the human toll on their medical and behavioral health, is just now being understood.

“In fact, the health risks associated with their occupational risks are more likely to lead to catastrophic early death and disability rather than their actual occupation,” he said. “Their occupational risks include hyper-vigilance, physical and emotional stress, sleep disturbance, sleep deprivation, chemical and traumatic exposures all of which lead to the accelerated development of medical and behavioral conditions such as heart disease, cancer, addiction, depression and post-traumatic stress disorder. It is our mission to come alongside our first responders with our programs in order to safely perform their profession leading to a healthy and productive life and retirement.”

Moffatt was nominated for the Sagamore by Carmel Fire Dept. Chief David Haboush.

“(Haboush) reminds me that I performed his medical evaluation when he joined the Carmel Fire Dept. in 1990. He has been instrumental in the state of Indiana providing his efforts to support and implement innovative health and safety programs for the fire service,” Moffatt said. “He cares deeply about his firefighters and wants the best for their health and safety. He is a trusted friend and colleague that I seek for advice.”

Receiving the Sagamore was humbling and an honor, Moffatt said.

“It is profoundly fulfilling to know your work is recognized but also that it is changing the lives of those who you are serving,” he said. “However, I share this honor with my wonderful staff and the men and women of the fire service and law enforcement from across the state of Indiana.”