Heather Millikan, executive director of the Fort Harrison Reuse Authority, has been with the organization since 2000. She vividly recalls her initial reaction when she heard that the military base was to be decommissioned in 1995.

“I grew up in Lawrence, and when I first heard the base was being decommissioned, I thought, ‘What are they going to do with it?’” Millikan said. “I didn’t realize I would eventually play a part in the decision-making process.”

From 1948 to 1950, the facility functioned as Benjamin Harrison Air Force Base. When the base closed in the ‘90s, community leaders knew they had challenges ahead, and they met them with enthusiasm and careful planning.

“Our banners work to bridge the gap between both the new projects, the historic buildings and the external environment surrounding them. Our Fort Ben banners contribute to a unique street-level energy enjoyed by pedestrian and vehicular traffic alike.”

The idea to install the banners was a collaborative effort between the City of Lawrence and the FHRA. The banners serve as guides for visitors to identify where they are within the city and are reminders of the “rich military history” of Fort Ben, according to Millikan.

“The banners clearly let people know not just where they are but serve as a reminder of what a truly special place that Fort Ben has always been,” Millikan said.

The Fort Ben banners are among the most recent permanent fixtures on the campus, and the FHRA has additional plans on the horizon.

“The FHRA is excited about so many things happening currently,” Millikan said. “(The) Civic Plaza and the new Hilton Tru Hotel just officially opened this month. The new Indianapolis-Marion County Public Library (Fort Ben Branch Library) will be opening in 2023. And several other exciting things to come in 2024 will continue to change the landscape.”  All the projects have been equally exciting as they have created more amazing opportunities for people to live, work and play at Fort Ben.

“What is probably most exciting is the question, ‘What’s coming next?’”

Fort Ben continues to redevelop and is nearing its final leg in its journey. Today, the Fort is a residential, retail and business community widely recognized as the model for reuse and redevelopment of a military installation.

Much of the former military base was preserved and approximately 50 buildings were converted into unique residential, commercial and office space, including a Tech Campus that has 25 tech companies that call Fort Ben home. The campus was awarded the 2020 Rising Tech City MIRA Award by TechPoint. The Fort also has many recreational amenities, such as Fort Harrison State Park, The Fort Golf Resort, the Theatre at the Fort and the Benjamin Harrison YMCA. 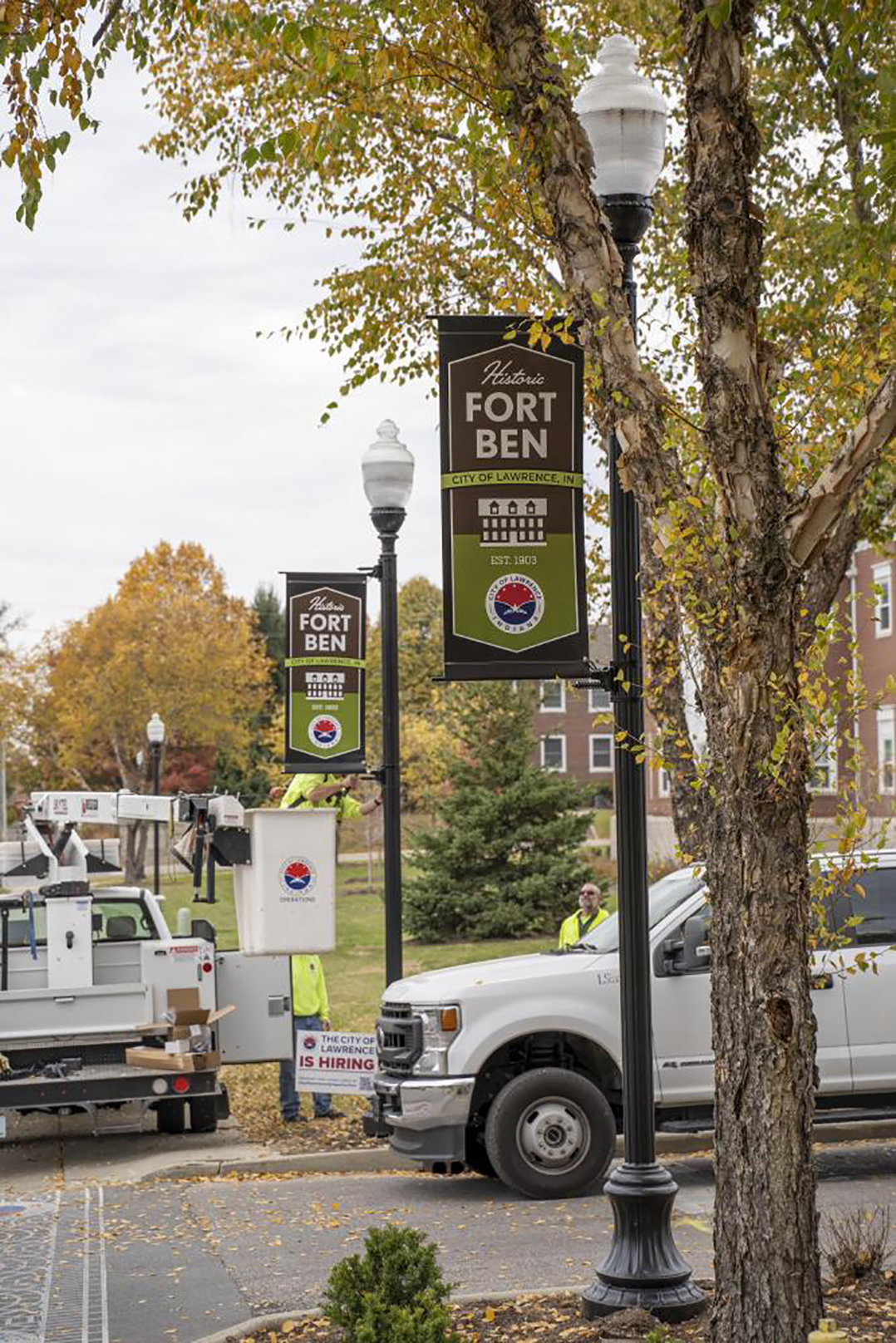 Established in 1903 as a U.S. Army base named after Benjamin Harrison, the only Indiana resident to serve as U.S. president, comprised 2,500 acres and was an installation for noncombat military training, including the U.S. Army Finance School, the Interservice Postal School and the Military Police Corp. The Defense Information School trained service members and U.S. Department of Defense employees to become journalists in print, radio, television and photography, and provided advanced supervisory training in public affairs, media and community relations.

Fort Benjamin Harrison was recommended for closure by the 1991 Base Realignment and Closure Commission. It officially closed Sept. 30, 1996, resulting in the loss of 1,050 civilian positions.

Representatives from Marion County and the City of Lawrence formed the Fort Harrison Transition Task Force to oversee conveyance and redevelopment of the former post. The state of Indiana passed legislation providing the stand-alone public body the power to buy, sell and lease property at the Fort.