You are at:Home»Current in Westfield»Westfield Cover Stories»Lay of the land: New program helps Westfield High School students learn about agriculture

Students at Westfield High School are learning about the different aspects of agriculture through a new program that launched this school year.

The school’s agricultural science classes are led by longtime educator Chris Kaufman, who is in his 22nd year of teaching agriculture sciences and is a native of Cloverdale, which is near Greencastle. Kaufman has taught agriculture in Florida and worked at Cloverdale Community Schools, Whiteland Community High School and Beech Grove City Schools, where Westfield Washington Schools Supt. Paul Kaiser previously served as the district’s top administrator.

At Westfield High School, Kaufman teaches principles to agriculture, an introductory course intended to expose students to different aspects such as animal science, plant science and other areas. Other courses being offered at the high school level include animal science and plant and soil science.

Kaufman said he hopes students will gain a better understanding of agriculture and prepare them for careers with major companies such as Elanco, Eli Lilly and others.

“Even though we’re urbanized here, we still have a vast majority of our community involved in agriculture,” Kaufman said. “We have a huge amount of agriculture still happening in an urban environment and instead of focusing on a production program, what we’re really looking for here is preparing students for those science jobs that are ag-related.”

Kaufman, who has also worked for the Indiana Dept. of Education overseeing agriculture education, was instrumental in launching what would become a successful program while at Beech Grove that became the largest in the state. Students such as Ava Lee, a junior at Westfield High School, jumped at the opportunity to take advantage of the new agriculture program this school year.

Lee, who has been involved in 4-H for the last five years, said she had considered transferring to a different district so she could take agriculture-related courses.

“When they added this (program), I was super excited,” Lee said. “When people think of agriculture, they think of animals and farming, but it’s so much more than that, and I think it’s a good way for people to learn more about it and explore other interests other than what Westfield has offered in the past.”

Lee encourages her fellow classmates to take advantage of the classes, which are electives.

Kaufman said as an educator, he wants to help students realize that careers exist in the agriculture sector. He added that it’s particularly important to have students learn about agriculture since humans interact with plants and food each day.

“I want these kids to know that (agriculture) is a real option for them to go into,” he said. “What better place to be preparing students for ag science jobs than right here? It’s a fascinating career opportunity that you may not know about until you get into it.”

Kaufman, who is the lone agriculture science teacher at the high school, hopes there is potential for the program’s growth next year. Officials want to build an agriculture center or offer a turf science program at some point in the future, he added.

But for students like Lee, the program is already establishing a foundation for a future career in agriculture education. She wants to be a teacher like Kaufman and plans to attend Purdue University.

Lee said she thinks by being enrolled in the agriculture program now, it will help with her curriculum in college, in addition to being prepared for career opportunities as well.

“I think it’ll help me get connections after college to find a job sooner,” she said. 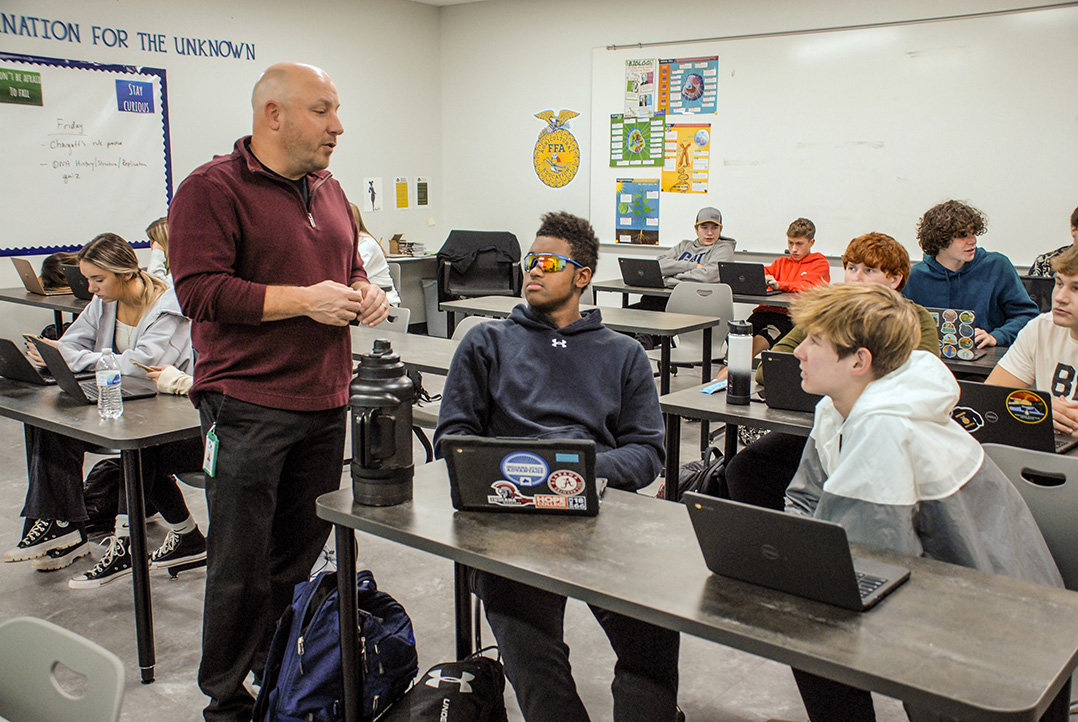 To learn more about agriculture classes being offered at Westfield High School or for businesses who may be interested in speaking with students about agriculture-related careers, email teacher Chris Kaufman at kaufmanc@wws.k12.in.us.

Kaufman is also in charge of the school’s FFA program, which is open to students who are interested in participating.