You are at:Home»Current in Noblesville»Noblesville Community»Holocaust survivor to share story at chamber event

Steve Rupp understands the time is running out on hearing firsthand stories of Holocaust survivors.

That’s why he wants as many people as possible to hear Indianapolis resident Frank Grunwald.

“We think this is an important topic and opportunity is fading as survivors are passing (away),” Rupp said. “The door is closing as sad as it is to say, it’s a reality. We want to make sure we have the opportunity to hear from Frank while he is still able to do these presentations.” 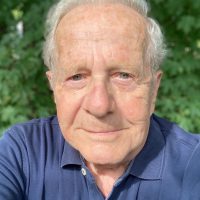 Grunwald will speak at a Westfield Chamber of Commerce special presentation from 11 a.m. to 1 p..m. Dec. 1 at IMMI Conference Center, 18880 B. East St., Westfield.

Grunwald is a friend of Rupp’s father, Jack.

“I’ve brought Frank into a couple of my daughters’ schools to speak,” Rupp said. “He spoke to Guerin Catholic as well as Westfield Intermediate School.”

Rupp said he asked the chamber board if it would be open to have Grunwald speak.

Grunwald was born in 1932 in Czechoslovakia, which was invaded by Nazi Germany troops when he was 6 years old. His Jewish family was taken to Terezín, a concentration camp. He survived being transferred to three additional concentration camps, including Auschwitz.

His mother and brother died in the gas chamber at Auschwitz, but another prisoner pulled Grunwald out of line, saving his life.

“He tells a chilling, haunting story about  survival and what he had to witness of his own family being gassed to death,” Rupp said. “I asked my dad how he is able to tell this story and my dad said Frank said it takes a part of his soul every time he tells it. He sees it as his responsibility as a survivor to share his story so it isn’t likely to happen again.

“He usually tells it to kids because he can have the biggest impact on them. Most kids study the Holocaust as part of their world history class.”

Rupp said Grunwald has the only letter that made it out of the Auschwitz concentration camp in the National Holocaust Museum.