Get to know the unique tastes of City Center 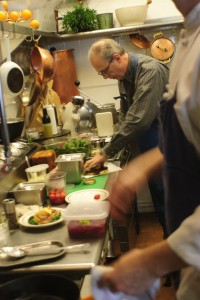 Larry Hanes heard while in California of a cooking technique used on eggs that had Golden State residents driving 45 minutes for a taste. He has since brought his own version to Carmel and anticipates similar pilgrimages from foodies in search of a cuisine unique to the Midwest.

Hanes opened Eggshell Bistro, his first restaurant, in Carmel City Center six weeks ago, but its menu and concept were three years in the making. He describes his menu as “global fusion,” a product of his travels to major metropolitan areas in the U.S. and Europe. He studied restaurants in New York, San Francisco, London and others, and during those trips, identified some of the best, and worst, practices employed by these restaurants. Coupling these findings with a master’s degree thesis detailing his plans for a restaurant, the foundation for Eggshell Bistro was created.

“I want to give people more choices,” Hanes said. “There is so much in the breakfast world that is untapped.”

The primary example is the cooking technique, sous vide, which is the heart of Eggshell’s menu. His eggs are cooked using laboratory technology that cooks them evenly, and at an exact temperature, for 75 minutes. The end result, he said, is an egg that “holds itself together perfectly” with a yoke, he said, is best described as “velvety.”

But the technique would be wasted without great products, Hanes said. That’s why he personally selects all the fruits and vegetables, and uses eggs from kelp-fed chickens he said are “truly free-range.”

“We’re the only ones in the Midwest that carry their coffee,” Hanes said.

Blue Bottle is working with Eggshell’s menu to create suggestions for perfect pairings, and the restaurant could begin offering dinner services on certain nights beginning this month. 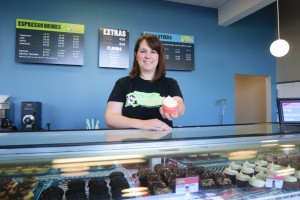 After eight years as an emergency dispatcher, Karen von Kamecke Sutton made what was, for her, an obvious career choice: opening a cupcakery.

The decision doesn’t sound unusual, considering her incoming cupcake orders routinely exceeded what she could produce for her 2008 Carmel Farmers Market booth. So in 2009, she left the city’s communications center and opened shop at a gas station on Range Line Road. Holy Cow, Cupcakes! has been in its new home at Carmel City Center since July, and Sutton has expanded her services and cupcake varieties exponentially since her earliest days in the baking business.

Holy Cow offers 50 types of cupcakes. Of these, 15 are made fresh daily and include two monthly offerings – an increase from one at the old location. A dozen of any one of the 50 flavors can be ordered at any time, and Sutton said local and organic ingredients are used in her products as much as possible.

While Holy Cow has added 10 new cupcake varieties since its move – including Nutella, sweet potato and gingerbread – its original favorites are “10 times better,” she said, thanks to the addition of two new chefs.

But Holy Cow no longer is just a cupcake store. Sutton also has added pastries, coffee and espresso to the business’ daily menu, and has expanded its hours.

The changes seem to be working. Sutton said business has tripled since her move, and this year, she could take her next step toward her ultimate goal: “cupcake domination.”

“You’ll definitely see us somewhere else by the end of the year,” she said. 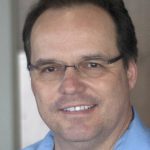 Mangia! owner Lee Tyler said his restaurant’s move to Carmel City Center has helped unearth a gem in the community.

“It’s a good restaurant, but people just wouldn’t give it a chance,” Tyler said of the restaurant’s days near 116th Street and Range Line Road. “We were still elegant inside, but it just didn’t have much curb appeal.”

Now Mangia! has an exterior appearance that matches its inside environment, he said, and the restaurant recently added lunch services Monday through Friday, and a new dinner service on Sundays.What has not undergone a substantial change, however, is the menu. Mangia! still offers authentic northern Italian cuisine made from old family recipes. It includes a number of traditional favorites, but Tyler said Mangia!’s atmosphere and execution of these dishes is unique. 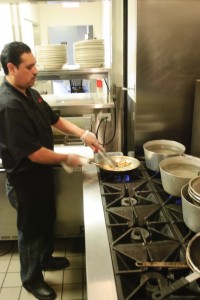 “Everything we do stands out,” he said. “On occasion, I’ve tried to take one item off the menu and put on something else, and somebody always has a fit. If we have the ingredients, we’ll make it. It doesn’t have to be on the menu. That’s our motto.”

But some of Mangia!’s menu items – like the rosticianna,a roasted pork loin stuffed with Italian sausage, mushrooms and pancetta – are found at few other restaurants, if any, Tyler said. He added the atmosphere inside the restaurant isn’t “cookie-cutter” and also distinguishes Mangia! from comparable restaurants in the area.

“I don’t think you’ll see another restaurant like this in the Indianapolis area,” Tyler said. 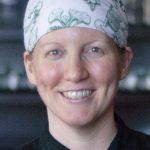 Nearly everything is shared at divvy – from the food to the conversations.

In fact, the concept of the restaurant stems from owners Richelle and Kevin Rider’s desire to share their favorite dining experiences.

Richelle, who also serves as the restaurant’s chef, said she and her husband try to pack as many restaurants and flavors into each of their trips out of town. The best way to do that, they have found, is to forgo traditional, single-entrée meals and move from restaurant to restaurant, eating small dishes with different flavors at each stop.

“That’s the way we like to eat, and we wanted to bring it here,” she said. “The small-plate concept is big in large cities, but it hasn’t hit Indianapolis yet. We wanted to be on the forefront.” 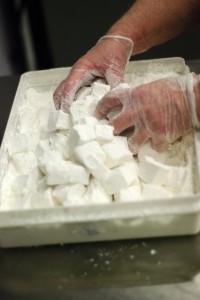 While its menu still includes some “big-plate” options, most patrons at divvy order small items and share them with the rest of their party – or anyone else sitting nearby. Richelle said one of the restaurant’s more popular features is its community tables, at which guests are seated next to strangers and encouraged to share a meal with their new acquaintances.

A few feet away at the bar, parties can try smaller amounts of the restaurant’s beers and unique cocktails, such as the Maple Manhattan, a sweet twist on the classic.

With a restaurant concept that encourages guests to try several dishes during each visit, Richelle said she needed to pack a lot of variety into divvy’s menu.

“It’s huge and it’s awesome. You can come back five times in a row and not repeat anything,” she said. “It’s really just inspired by the things I love.”