You are at:Home»Current in Noblesville»Noblesville Schools receives report of student with measles

Noblesville Schools announced Monday evening that they have received a report of a student with a possible case of Measles. The announcement came after health officials confirmed 10 cases have been reported in Boone and Hamilton Counties last week. The outbreak follows an infected individual’s visit to The Huddle in the Super Bowl Village on Feb. 3. 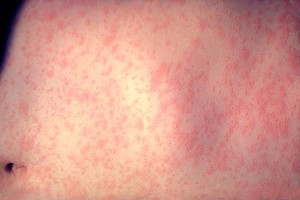 Photo courtesy of the CDC

Measles is very a very contagious illness, more specifically a respiratory disease, caused by a virus. Symptoms usually begin approximately eight to 12 days after someone is exposed. Symptoms include a fever, cough, runny nose and red eyes. Days later, a rash can begin forming on the face and upper neck and spread to other areas of the body.

“Noblesville Schools has received information that a student at NIS meets the Indiana State Department of Health’s case definition for having the measles. At this time, the case has not been confirmed by a physician, but the parent has reported that the child has exhibited symptoms of the disease. The child is not in school and may not return until s/he meets guidelines established by the Indiana State Department of Health and Noblesville Schools.

“We have been in close contact with the affected family, the Hamilton County Health Department, and the Indiana State Department of Health to ensure the safety of all Noblesville students. All areas of the school have been thoroughly cleaned to help prevent the spread of the virus.

“According to the Indiana State Department of Health, anyone who has not received two doses of measles-containing vaccine (usually the mumps-measles-rubella vaccine) is at risk for measles; those who have been vaccinated for measles are unlikely to acquire the illness.

“Measles is extremely contagious. Symptoms may include cough, runny nose, drowsiness, loss of appetite, fever, spots inside the mouth that resemble grains of salt, and increased sensitivity to light. Around the fourth day of illness, a fever of 101 degrees or higher may appear, and a blotchy red rash will appear on the face and spread downward to the rest of the body.

“If your child exhibits symptoms of measles, please contact your family physician immediately and do not send your child to school. Your physician can determine whether the symptoms are caused by measles.

“The Indiana State Health Commissioner stated, ‘Vaccination is the best protection against measles.’ Currently, 98 percent of Noblesville students from pre-school through high school are immunized. Noblesville Schools will be contacting the parents of each student that our records indicate has not received the measles vaccinations to discuss receiving vaccinations.

“For more information on the measles, please go to the Noblesville Schools’ web site, www.noblesvilleschoools.org, or contact your physician.”