You are at:Home»Current in Westfield»School of Rock to open first Indiana location in Carmel 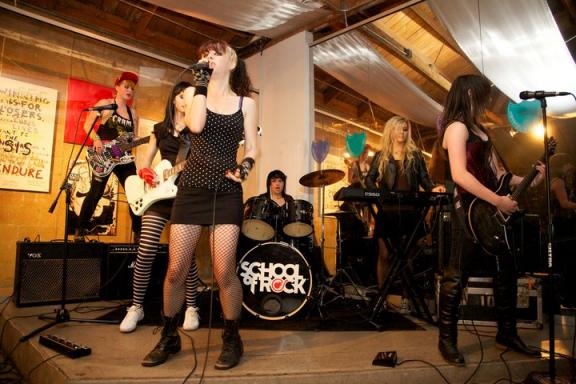 Kids who daydream about playing a rock concert for hundreds of people can soon make that dream a reality.

School of Rock is a national chain of music schools with more than 90 locations in the nation, andit will open its first in Indiana – near downtown Carmel – in a few weeks.

Established in the late 1990s, School of Rock (the basis of the hit movie starring Jack Black), is a place where kids learn more than how to play music, said Elyse Causey, general manager of the School of Rock in Carmel.
“Yes, we teach the kids to play their instruments, but we are about much more than just memorizing a song,” Causey said.“We believe that, through our performance-based approach, kids not only learn music theory and how to play in a band, but they learn bigger lessons about the importance of practice, teamwork, dedication, confidence and self-expression.”

Just as in the movie, School of Rock students learn their instruments and practice for weeks, and eventually,as a band,put on a concert for a crowd of couple hundred family and friends. Because the students are all a part of one band, they will learn the importance of what it means to respect and help one another in order to reach their end goal.

The grand opening of the Carmel location is March 17. The event will feature food, a tour of the school, introductions to the teachers, a student concert and the smashing of a guitar, instead of the traditional ribbon-cutting ceremony.
626 S. Range Line Rd., Carmel
848-ROCK
www.carmel.schoolofrock.com