You are at:Home»Current in Carmel»Carmel Cover Stories»Running for a reason

People give back in different ways. Some tithe, some donate time or textiles, some simply think.

Others get moving. For Karen Hawkins, Communications Director of Race 4 More, and Larry and Carole Prible, founders of Love at Work Ministries, motion is exactly the method. Those three souls are the pillars of a late-September Carmel event which will use that motion to move mountains.

“We’re so blessed in Hamilton County in so many ways,” said Hawkins. “In some ways, it’s hard for us to imagine the lives that some kids and families are forced to live.”

Hawkins is the point person for Race 4 More, a running / walking event slated for September 22 that benefits underprivileged children in Costa Rica. The Pribles’ Love at Work project is the facilitator of the day’s proceeds, and the couple personally travels to the outskirts of the country’s capital city,San Jose, to impart that support.

It is a big undertaking. 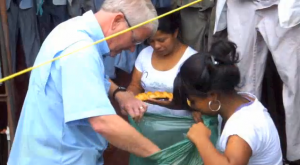 “The area where we serve is best described as an urban slum,” Larry said. “One out of six people in the world today lives in an urban slum; but just a handful, one out of every 6,000 missionaries serves there.”

A great deal of Love at Work’s efforts have been concentrated in Tejarcillos and Alajuelita, suburbs of San Jose. The Pribles started working with Centro Cristiano de Alabanza, a church in Alajuelita, in 2004. That grew into the present-day Love at Work, a Carmel-based non-profit which focuses on building housing, nutrition and education for local residents. A new, ambitious project is the erection of a feeding center which will nourish hundreds of children daily.

Through the years, Love at Work has provided direct grants and helped mobilize funding of more than $1 million and built nearly 100 homes worldwide.

“Tejarcillos is beyond description,” said Larry. “It’s a hellish place, full of darkness, yet thousands of kids live there in the midst of violence, drugs, prostitution, child abuse. Kids who had no say in where they were born.” 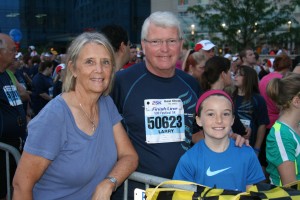 Race 4 More is a first-year endeavor aimed at furthering the cause of those children. Featuring four-mile and one-mile circuits, the event will meander through Carmel, beginning and ending on the cross country course at Northview Church. Former Indianapolis Colts lineman Tarik Glenn will be a featured guest, as will Gary Romesser. Romesser is the No. 1-ranked senior grandmaster runner in the country, and a five-time Mini Marathon champion.

“We have been planning since March,” said Hawkins. “We have a number of sponsors who have stepped up – Zeko Shoes donated 200 pairs of new shoes, because some of these kids don’t have them. This will give them something that’s going to create some smiles on faces. I’m excited to be part of it.”

This work is nothing new to the Pribles. In 1994, they built 21 homes in five days with Habitat for Humanity on the Sioux Indian reservation inSouth Dakota. On the last day, they handed keys to a family moving from a tin shack with a dirt floor. Their 8-year-old daughter grabbed the keys, and Larry says he can still see her smile.

“I realized then how important this was,” he said.

For Hawkins, who’s a mainstay on the home front side of the effort, it’s about garnering support from a willing community.

“This is a way to be able to reach out to the most vulnerable children and families you can imagine,” she said. “We’re hoping it will be a fun day, but also a day that will result in tremendous support. We’re really excited to step out into the community and get the word out and help people help these kids.”