You are at:Home»Current in Zionsville»Somewhere between Vegas and Oz 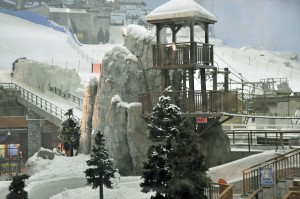 Dubai, one of the United Arab Emirates, occupies a strip of desert along the Persian Gulf barely larger than Rhode Island.  In 2000, it had fewer residents than metropolitan Indianapolis.  And yet by 2012 it had become one of the world’s top ten tourist destinations, drawing more visitors than Rome, Amsterdam and Shanghai.  Its extraordinary appeal is based on a unique combination of superlatives and incongruities, making it something of a cross between Las Vegas and the Land of Oz.

Dubai has become famous for its over the top architecture.  More than half a mile high and twice as tall as the Empire State Building, the Burj Khalifa is by far the world’s tallest building.  Its associated shopping mall is the largest in the world and attracted more visitors in 2012 than New York City.  The world’s largest man-made islands, just off the Dubai coast, are in the shape of palm fronds. A hotel in the form of a sail claims, without contradiction, to be the world’s only seven star hotel.  And on and on.

But the unique appeal of Dubai is also created by its juxtaposition of images and cultures.  With the outside temperature above 110 degrees, people line up to rent coats and gloves so they can ski one of five slopes on an indoor mountain more than 25 stories high.  While Muslim residents of Dubai are forbidden from consuming alcohol, guests in Dubai’s hundreds of hotels drink expensive wines in front of simulated fires.  The Raffles Hotel, named for the stately colonial-style hotel in Singapore, mimics the shape of an Egyptian pyramid, guarded by a colossal statue of pharaoh Ramses II.  Turbaned sheiks, accompanied by wives hidden behind burqas and hijabs, shop for provocative lingerie in a mall that also features mannequins wearing burqas ornamented with expensive jewels.  Worshippers use a high speed monorail to attend Friday prayers in a sand stone mosque reflecting a design first used more than a thousand years ago.

The economic downturn interrupted Dubai’s dream of becoming the world’s unquestioned entertainment and financial capital, a dream that once demanded about 25 percent of the world’s construction cranes.  Just a couple of years ago, people wondered who would fill all the vacant offices and apartments.  But the construction has resumed, with plans announced in December to build an even larger mall and a park thirty percent larger than London’s Hyde Park.  Ads are once again reporting an urgent need for experienced crane operators.

If you have tired of Las Vegas and don’t know the way to Oz, a trip to Dubai might be just what you need.  But first a caution. Dubai is still a desert and blinding sand storms sometime interfere with its effort to create an earthly paradise.