You are at:Home»Current in Zionsville»Family Affair

Owners of Kern Bros. Shoes share the secrets of their 40-year success story 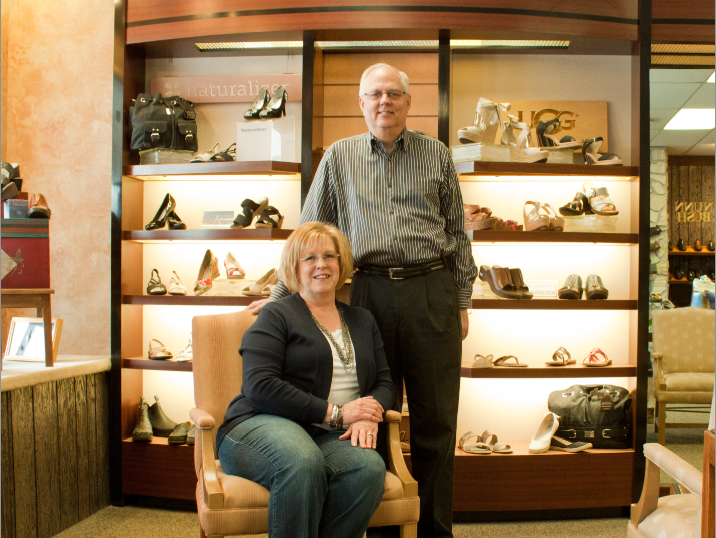 Kern Brothers Shoes wasn’t even open for the day when a customer walked in for shoelaces. Instead of turning him away, owner Bill Kern greeted him with a smile, rang up his purchase and thanked him for stopping by.

It’s that sort of customer service that Bill and his wife, Linda, attribute to the success of their business, located in Boone Village for the past 40 years. 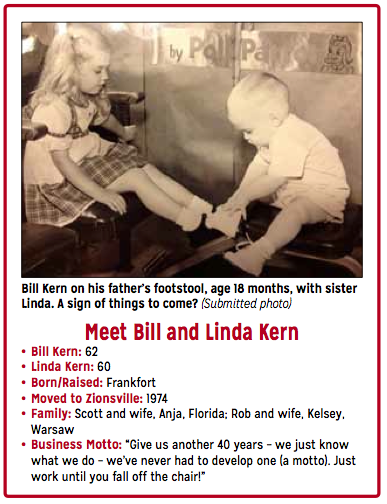 High school sweethearts, Bill and Linda had a plan for their future – he would go into the family shoe business, she would teach.

“After college I worked for Brown Shoe Co. in St. Louis in their marketing program,” Bill said. “At that time, my dad agreed to form a partnership and open this store.”

But, he knew he couldn’t do it without Linda.

“We had not been married for even a year when he came to me and said, ‘I want to do this but can’t unless you come with me,’” Linda said. “We were so young when we opened the store.”

“After World War II, my dad went to work for the Frankfort store and became a partner with my grandfather,” Bill said. “Then, I worked there part-time through high school.”

When it came time to open his own store in 1974, Bill and Linda settled on Zionsville, a growing area at the time. The family shoe shop was originally 2,000 square feet. Another 1,600 square feet was added in 1992 for athletic shoes and Zionsville athletic apparel.

When it comes to keeping things running smoothly, the couple has help from Ceil Mattingly, who’s been with the store since the early 90s, and her sister-in-law, Lisa Mattingly.

“We’ve had great people who have been with us, and some have worked for us for long periods,” Linda said. “I feel like they should all be standing behind us because we couldn’t do this without them.” 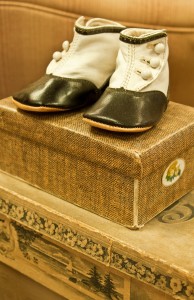 These antique baby shoes were used as a “prop” when Bill Kern’s dad proposed to his mother by hiding the engagement ring inside the shoe.

“We’ve been very fortunate to have a great group of kids who want to work for us,” Linda said. “We take them on buying trips with us so that’s been fun – they bring a lot of energy.”

“They keep us lifted up,” Bill added. “They help advise us on what their generation wants.”

It is the professionalism of their staff, according to Bill and Linda, that customers most often remark on. And, the fact they provide service above and beyond.

“Bill has been known to stay if someone calls at closing and has an emergency. We have had to put off family dinners,” Linda said. “Many times he will deliver shoes to someone in a nursing home or if they can’t get out, and I know he does it just because that’s who he is. I think that’s the whole secret to why the business is here and something he learned from his dad and grandpa – the little things behind the scenes.”

Both acknowledge how fortunate they are to be able to do business in Zionsville.

“The support from the community is just huge in our ability to stay in business. They are people who believe in shopping locally and that’s something unique to this community,” Linda said. “A lot of them are customers who came to us as children and are now bringing their children in and that’s just so much fun to see.”

The couple also gives back to the community, sponsoring everything from Little League teams to choral groups.

“It’s a symbiotic relationship,” Bill said. “We try to support the community, especially the youth. I feel bad because we can’t do everything, but we try to support as many as we can.”

And they will always keep trying to do what they do best – provide customer service with a smile and a thank you. 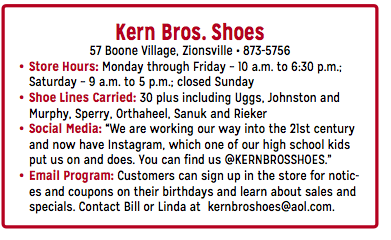