You are at:Home»Current in Westfield»The tradition builds

“We’re building on a tradition where you don’t have to go someplace else. There are events and opportunities in your own backyard that you can get if you went elsewhere,” she said.

Westfield Rocks the 4th began in 2009. Jones said the committee learned an important lesson that first year – an all-day festival was too long.

“It’s hotter than blazes in the afternoon and people don’t want to spend six hours in the heat and watch fireworks,” she said. “We learned a lot over the last couple of years so it truly makes things run smoother.”

The event has always had main stage entertainment. In its first year, a Battle of Bands contest was held. Since then a local musical act has been hired and this year, Dave and Rae Band will headline its second consecutive year, and Stella Luna & The Satellites will open the show.

“We are so honored and excited to be coming back. Last year was awesome, hot, but awesome,” said Lisa Rae of Dave and Rae. “I love playing at Asa Bales and can’t wait to play again.”

“I have lots of personal connections with the city,” she said. “Westfield has been good to my husband, Bobby, me and our daughter, Stephanie Walker, a teacher at the middle school. Dave and Rae Band celebrating America’s best holiday in such a wonderful place, (it’s) incredible!”

In its fifth year, Jones predicts Westfield Rocks the 4th will be bigger and better than ever. She said this year’s Headliner’s Car Show is anticipated to double in size, the kids’ area will continue to add new activities to the live entertainment and rock climbing wall brought in last year, and the best festival food can be found from marketplace vendors and The Mill Tavern’s beverage garden.

“Our fireworks will be the best fireworks in the county,” Jones said confidently, adding the same fireworks company has been hired by two neighboring Hamilton County cities. “Because of the staging area, our fireworks have to be really high. There are no ground displays which are costly so we get more bang for our buck.” 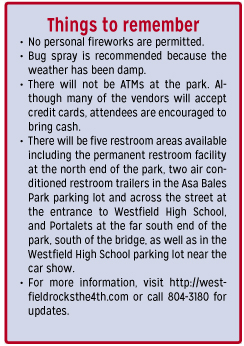 The kids’ area, presented by Imagine Church, will offer fun games and activities for kids of all ages such as face painting, a photo booth, five different bounce houses and more – and all activities are completely free.

“The kids’ area will be bigger and better than it’s ever been,” Jones said, adding that the assistance of Imagine, City Springs, First Baptist and Oak Spring churches and the Westfield Lions Club are crucial to the event’s success.

“The great thing about a big event here is how much the volunteers step up,” Jones said. “These large groups are making it great for us to handle volunteers.”

One of the great aspects of Westfield Rocks the 4th is its location in Asa Bales Park.

“The setting makes it special,” Jones said. “Asa Bales Park is where all the festival and activities take place and there’s plenty of parking.”

Jones said the Westfield Intermediate and Middle schools are completely open for parking, as is the north side of Westfield High School. While Hoover Street will be closed between Union Street and Shamrock Drive beginning at 8 a.m. Thursday, the surrounding streets and City Hall will be open.

“There’s lots of adjacent parking and four trail connections to Asa Bales Park,” she said. “The largest compliment we get is how quickly you can get out. There are so many access points.”

Jones said the car show awards begin at 8 p.m. and once done that area is open for residents.

“Those that come just for fireworks, these parking lots will be open back up probably around 8:30 p.m. for the public,” she said.