You are at:Home»Current in Westfield»Police release suspect’s image 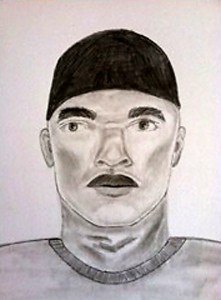 Westfield police officers are seeking information about this suspect of interest in connection to an armed bank robbery on Aug. 31. (Submitted drawing)

The Westfield Police Dept. has released a sketch of a person of interest suspected to have committed an armed robbery of Community Bank, 144 W. Main St., on Aug. 31. WPD Spokesman Sgt. Robert Dine stated that the suspect entered the bank when it opened, displayed a handgun and demanded money.

“He fled the bank, with an undetermined amount of money, and ran south on foot. Witnesses say he entered an older white minivan and fled the area,” he stated.

Dine said the suspect is described as an African American male between 20 and 30 years of age. He was last seen wearing dark pants, a dark shirt and his face was covered by a white bandana or pillow case.

Dine stated the person of interest was seen in the area of the 100 block of N. Union Street near the trail to Asa Bales Park at approximately 8 a.m. on Aug. 31. He was accompanied by another African American male who was described as clean shaven, 30 to 35 years old, approximately 6’01” and 200 pounds with an athletic build. That man was wearing a black bandana, black T-shirt, black basketball type shorts, black socks and shoes.