You are at:Home»Current in Zionsville»Zionsville Marketplace? 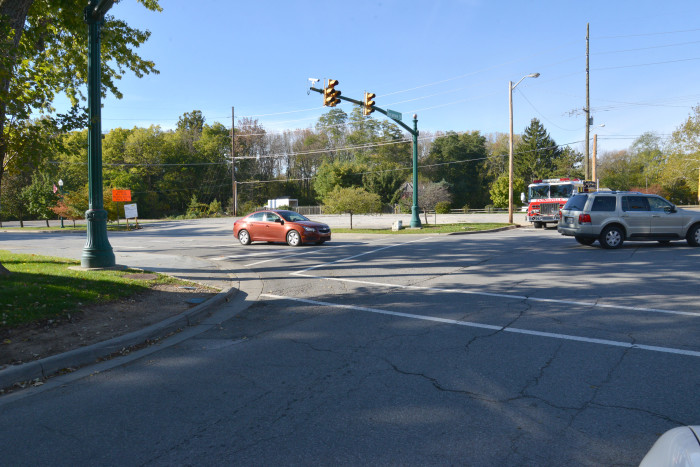 In a land survey contracted by Buckingham Cos., 4 parcels of land make up a 20.95 acre plot including the former Citgo lot as well as properties owned by Marcella Compton, Barbara Hanson-Slaff, and Ralph Stacy/Janice LaBolt.

A 20.95-acre mixed-use development could be coming to downtown Zionsville

By Julie Osborne and Dawn Pearson

There is something going on with the parcel at the southwest corner of Main and Sycamore Streets, and it encompasses more than the 2.4 acres of the former Citgo lot.

Thus far, developer Buckingham Cos. and its contractors are mum about the project.

In an e-mail to Current, Buckingham President Brad Chambers stated, “Our development group is and will be actively working with stakeholders as plans evolve. Please know that we are very early in the process at this point.”

Bits and pieces about a proposed 20-plus acre parcel, currently valued at $1,523,000, labeled Zionsville Marketplace in a land survey commissioned by Buckingham Cos. have been spreading through the community and have some residents concerned.

Buckingham has been mostly silent on the proposed project but provided a statement on Oct. 22 in which it made clear its interest in the effort.

“Buckingham Companies is exploring a mixed-use development project on several acres near downtown Zionsville. At this point, Buckingham is gathering information about municipal and regulatory approvals needed to move forward and engaging both internal and community stakeholders to formulate a project that effectuates the best of village infill redevelopment. Buckingham intends to bring its breadth of experience and reputation for quality and success, and achieve multiple stakeholder goals for this unique real estate redevelopment opportunity,” Scott Travis, Buckingham senior development executive said. 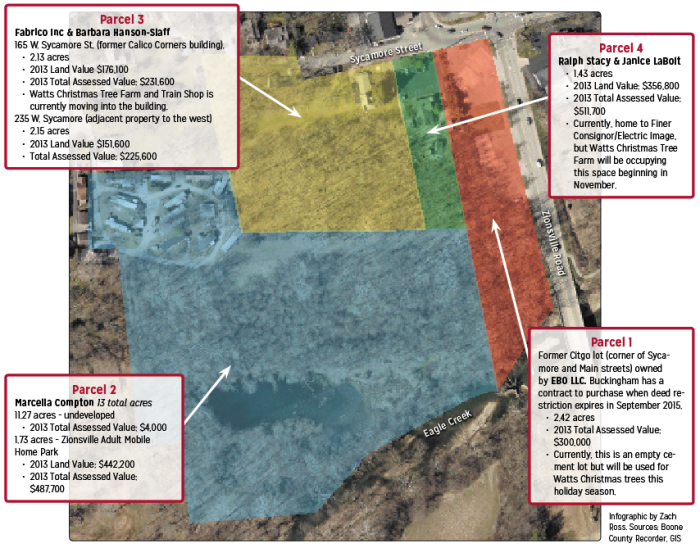 ‘Who wants to give away property?’

Not only is there concern about what makes up this mixed-use development, which will ostensibly be comprised of residential and retail components, and how it will affect the historic Village, residents in the area are concerned about the process.

At least one homeowner in the area, who spoke only on the condition of anonymity, received a letter dated Sept. 13 that included a land title survey and a quitclaim deed. Such a deed is a legal instrument by which the owner of a piece of real property, or the grantor, transfers his or her interest to a recipient, or the grantee. The owner/grantor terminates (“quits”) his or her right and claim to the property, thereby allowing claim to transfer to the recipient/grantee.

Zionsville resident Gary Angstadt, Century 21 Realtor and member of the residents’ association, stepped in to help at the request of an elderly neighbor who received the letter with the quitclaim deed and didn’t know what to do.

“He came to me shaking. Some of these people are elderly and have been in their homes 50 years,” Angstadt said. “Their approach to neighbors was to send a copy of the survey to the residents because the property line (in the old survey) is not correct. According to the new survey (created by Sea Group), residents would gain three to four feet of property. But they were asked to sign a quitclaim deed to transfer this land to the new owner, and they weren’t offering any payment. Who wants to give away property?”

“They” are Goodin Abernathy LLP, the law firm that represents one of the sellers of the four parcels included in the Zionsville Marketplace survey. The letter explains an overlapping boundary issue and also the status of the land.

“Ms. (Barbara) Hanson-Slaff is in the process of selling her property and the assessor has discovered a boundary overlap … ,” the letter stated.

In the letter, residents also were told that an attorney would arrive on a specific day and time to collect signatures on the quitclaim deed. “The residents were not asked and nothing was communicated to them. They are not going to sign the quitclaim deed,” Angstadt said. “(The) approach doesn’t sit very well with the residents. They didn’t like being treated like this.” 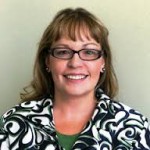 However, the survey packaged with the letter was contracted by Buckingham. When questioned about the survey, Buckingham representatives offered no comments.

Despite the frustration with the process and the purported treatment of property owners affected in the area, Angstadt praised Buckingham Cos.

“Buckingham Properties does a very good job in developing residential and retail together. I am very pleased they are taking on this parcel of land,” he said. “This is not why residents were upset. What residents are upset about is how they were treated regarding this land.” 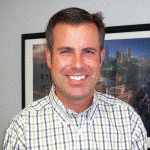 The mystery surrounding this land began when the former Citgo lot was purchased on contract in July by an undisclosed buyer, according to Bo Leffel, a broker with Cassidy Turley, who represented the buyer now known to be Buckingham Cos. In August, a survey was done by Brian Rismiller of Sea Group for “BZ Land Partners.” According to the Indiana Secretary of State’s office, the entity was formed June 19, 2013 by Andrew I. Klineman, senior legal counsel at Buckingham Cos.

The land title survey shows the site covering 20.95 acres with four main parcels owned by Ralph Stacy and Janice LaBolt, Barbara Hanson-Slaff, and Marcella Compton. The former Citgo lot, which Buckingham has an option to purchase in 2015 when a deed restriction ends, completes the 20.95-acre puzzle.

“We’re looking forward to selling it,” Stacy said. “That puzzle has been put together in the past but has never become a reality. I’ll believe it when I see it.”

Compton owns 13 acres, the largest parcel in the Zionsville Marketplace, including a mobile home park she bought in 1969 and undeveloped land along Eagle Creek.

“I’m interested in selling it and retiring but I don’t have any details,” Compton said. “I’ve had two deals before up until closing that fell through so I don’t get too excited. Never count your chickens before they’re hatched.”

Hanson-Slaff declined to comment on her parcel but the quitclaim request letter confirmed that it is in the process of being sold.

According to a source close to the project, who would speak only on the condition of anonymity, Buckingham already has acquired an option to buy the Stacy/LaBolt and adjacent property owned by Hanson-Slaff.

Residents could be displaced

Despite work going on behind the scenes, residents who could be displaced have not been notified.

“Guys came in and did soil and core samples all through here and up in the woods a week or two ago,” Bonnie Sloan, a four-year resident of Zionsville Adult Village mobile home park, said. “I haven’t heard anything. I would like to be informed on what’s going on. It would be hard to find some place here we could afford. I’ve lived in or around Zionsville my whole life and I don’t plan on moving.”

The mobile home park has 16 lots, but some are unoccupied.

Angstadt, who can see the trailer park from his home and the Citgo lot from his office at Century 21, knows market prices well and is aware of the challenges these residents would face.

“It’s the cheapest place in town to live by far,” he said. “It’s too bad. That way of life will be destroyed. I know a couple of people who live there who work at Dairy Queen and the Friendly Tavern who walk to work now. I don’t know if they even have a car.”

Compton said she has not given notice to residents yet because nothing is finalized. “This has happened before. No one should be concerned. I will give them notice, but I still don’t know how much time it will take,” Compton said.

Once Buckingham acquires the land necessary for its planned project, which today appears to be in its closing stages, town filings can begin. Originally providing a filing date by the end of the year, Pipkin later retracted and said, “At this point, Buckingham still has many variables in flux for the potential project, so they don’t yet have a timeline for when they might file a request.”

Until filings are made, town council members and staff have limited information to share with residents.

“It’s private property so they can propose anything they like,” Town Council President Jeff Papa said. “They (Buckingham) need to be conscious that what they propose fits with the village. A good development is welcome there and is better than an empty, cement lot.”

The Farm, a similar mixed-use property (but three times the size at 62 acres) owned by Pittman Partners LLC is just over a mile away and already in the works at Sycamore Street and Michigan Road. Although similar in types of potential retail and residential establishments, developer Steve Pittman said he does not see Buckingham’s development as competition.

“I see it as a positive and bringing in more people,” Pittman said. “A rising tide raises all the boats.”

Angstadt also expressed enthusiasm for the project despite the rocky start.

“We’re excited about it. We just want it done right,” Angstadt said. “We just want some conversation with (Buckingham).”

Founder and president: Bradley B. Chambers

Buckingham Foundation – Bradley B. Chambers established the foundation in 2006 to intersect his involvement in the community with his family’s interest in addressing homelessness and affordable housing. It annually supports more than 45 nonprofit and civic organizations through philanthropic outreach in the areas of affordable housing, community and economic development, and arts and culture. For more information, visitwww.buckingham-co.com

Examples of Buckingham developments include: CityWay in Indianapolis, The Avenue in Indianapolis near IUPUI, and Providence at Old Meridian in Carmel. In Zionsville, Buckingham is working on a proposed expansion of Quail Run Apartments on Ford Road.