You are at:Home»Current in Carmel»Carmel Community»Carmel High School senior got to meet president 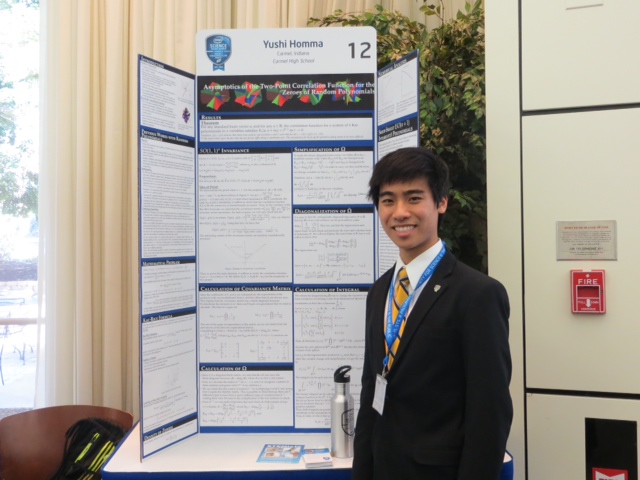 Carmel High School senior Yushi Homma was a finalist in the national Intel Science Talent Search for his original research into polynomials and their coefficients. (Submitted photo)

Carmel High School senior Yushi Homma had the honor of becoming one of 40 finalists in the Intel Science Talent Search, the most distinguished pre-college science competition in the nation.

To enter the search students must complete their own original scientific research over the course of a year. Of all the applicants to the search, about 300 students are selected by an independent committee to be recognized each year. And from the 300 students, 40 are picked to travel to Washington D.C. to undergo final judging and compete for $630,000 in awards.

“I heard of a student the year above me who was an Intel semi-finalist and I heard of his success, so I wanted to try,” Homma said. “I was doing research already, so I thought, ‘Why not?’”

Homma’s project focused on polynomials whose coefficients are random variables. The variables take on certain values at different probabilities, and he studied the correlation of functions between real zeroes of systems of these polynomials.

“This is an open problem that a professor from IUPUI brought to my attention,” Homma said. “I was given a few different problems to pick from.”

Homma received help through mentoring from IUPUI during his project research.

“The research itself took a little less than two years,” he said. “The main format was that I meet with my mentor two hours on the weekends and work the rest of the week, when I can, to get further in the research.”

But eventually all the hard work paid off when he was selected to be among the finalists and travel to Washington D.C. The trip also provided life-long memories and a chance to build new meaningful friendships.

“The best thing that the competition in D.C. offered was meeting the other 39 finalists,” Homma said. “All these students had really high passions for science and mathematics. We struggled together through the judging interviews and ended up being really good friends.”

The treatment Homma received was luxurious and memorable. He not only had an all-expenses-paid trip to the capitol, but he was able to meet President Barack Obama, two U.S. Senators and Congresswoman Susan Brooks.

“Intel really wants to promote science and mathematics for young people so this is how they reward students who have excelled, so young people can see that it does pay off,” Homma said.