You are at:Home»Current in Westfield»Westfield High School’s Turley earns another award

Westfield High School Class of 2014 graduate Mitchell Turley has been named the National Football Foundation’s State of Indiana Scholar-Athlete of the Year for 2013-14, making him the second recipient of this annual award that is sponsored primarily by AdvoCare distributors Andy and Mandy Hosier of Westfield. 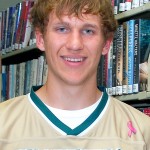 Presentation of a trophy and scholarship check will take place July 17 as part of the Indiana Football Coaches Association’s North-South All-Star Game Banquet, at Primo’s South in Indianapolis where Turley will be introduced as one of four finalists for the award. WHS Coach Jake Gilbert will lead the South team which includes fellow Shamrocks Nick Ferrer and Zane Burtron.

“Despite all of his success, Mitch has remained grounded and committed to his priorities,” Gilbert said. “I couldn’t be prouder of what Mitch has accomplished at Westfield. It’s been an honor to teach and coach him.”

Turley was selected by a panel of judges representing the four active NFF chapters in the state. The “competition” was based 40 percent on academics, 40 percent on athletics and 20 percent on citizenship, leadership and character.

“Mitch is one of those special people that you come in contact very rarely in life that makes everyone around him better. He has a servant’s attitude and respect that allows him to be a great leader in the future in our society,” said Eric Rauch, WHS AP Biology teacher.

Turley was valedictorian of his senior class of 469 with a 4.52 grade point average, never receiving anything other than A’s through all his years of schooling. He scored 1,460 points on the verbal and math portions of the SAT and will attend MIT to major in biomedical engineering.

Athletically, Turley was a standout linebacker for the Shamrock football team, which finished as state runner-up in Class 5A, and was a four-year letterwinner, two-year captain and All-American player for the Westfield lacrosse team. He plans to play both sports at MIT.

“Continuing my academics is first in my priorities, but I also get to do two things I love,” Turley said. “I really feel blessed. I’ve been gifted with the skills and talents on the academic side and the athletic ability to play not one but two sports.”

Turley will be eligible for the national scholar-athlete program also includes the selection of five Regional Scholar-Athletes of the Year, all of whom will advance to be honored at the NFF’s annual Awards Luncheon and Dinner in December at the Waldorf-Astoria Hotel in New York City.