You are at:Home»Current in Carmel»Carmel Community»Carmel’s CERT program says it is ready and willing to help 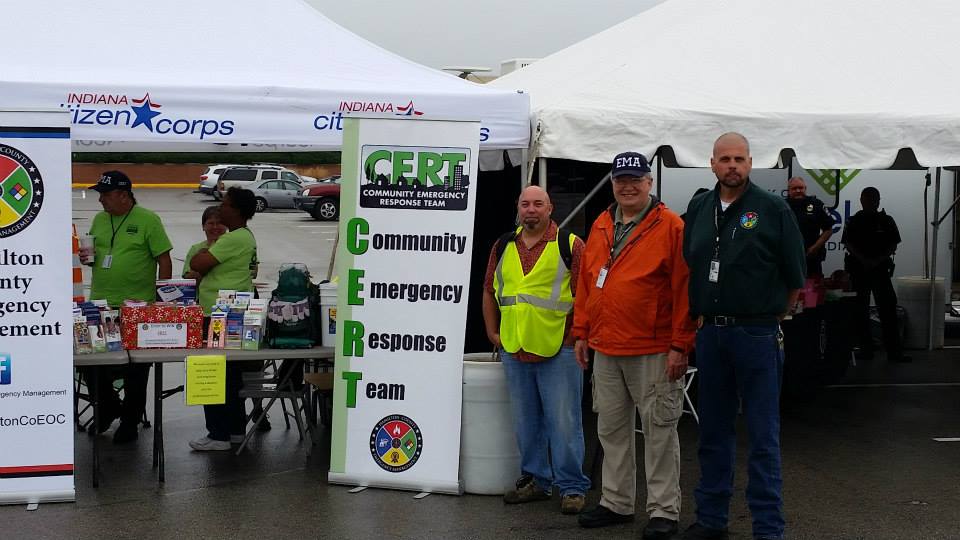 Members of the FEMA CERT team in Carmel help to raise awareness during their neighborhood crime watch programs. (Submitted photo)

Prepare for the worst, hope for the best.  That’s the motto of the Hamilton County FEMA CERT (Citizens Emergency Response Team), which is a group of community volunteers who are trained to be immediate responders in their neighborhoods until first responders can arrive on the scene in the event of a natural or manmade disaster situation.

CERT is a nationwide program that is implemented at the local level as part of the Citizens Corp under FEMA and Homeland Security that also includes such programs as Neighborhood Crime Watch.

According to www.ready.gov, “Forty-six percent of individuals expect to rely a great deal on people in their neighborhood for assistance within the first 72 hours after a disaster.”

“Disasters turn out to be a brutal equalizer in our world,” said Jon Baldwin who is the Hamilton County Program Coordinator and only CERT certified instructor in the county. For Baldwin, disaster preparedness is a way of life as he is also a veteran of Desert Storm and served for 22 years in the Army Reserve and 11 years in the Indiana Guard Reserve.

Baldwin and his cadre of volunteers work closely with the fire department, police department, Red Cross and other community agencies and services such as food pantries in the training and implementation of their emergency response plan.

Volunteers go through the CERT training program for the benefit of emergency preparedness for themselves, their families and their neighborhoods.  In the event of a major disaster, the goal is for each neighborhood to have a CERT trained responder who can provide basic medical care, put out small fires, turn off gas lines, triage patients according to severity of injury and give first responders an assessment of the situation.

The all-volunteer program is gaining momentum in Carmel and Clay Township with over 20 CERT trained citizens who have all undergone a nine-week training session similar to training done by fire and EMT first responders.  The group’s Facebook page and Twitter feed (@HCINCERT) contains emergency preparedness tips from protecting pets to sheltering electronics with a Faraday cage in the event of a Solar Storm.

Carmel resident Charlie Demler learned about the CERT program through a friend and thought it was a logical extension of his role as Neighborhood Watch Captain.  He was called to service last winter during the Polar Vortex when the Red Cross set up a shelter at Carmel High School for those without power and has recently picked up ham radio skills.

For the Demlers, being a CERT volunteer is a family affair with Charlie, his wife, son, daughter and former wife all having gone through the training program.

Over the years, an estimated 200 people have been CERT trained in Hamilton County which has a population of 290,000 and growing according to Baldwin, however, more volunteers are needed.

“It’s not a matter if something bad happens, it’s just a matter of when. I don’t think that’s screaming doomsday.”  For more information on CERT training or other volunteer opportunities with the EMA, call 770-3381.