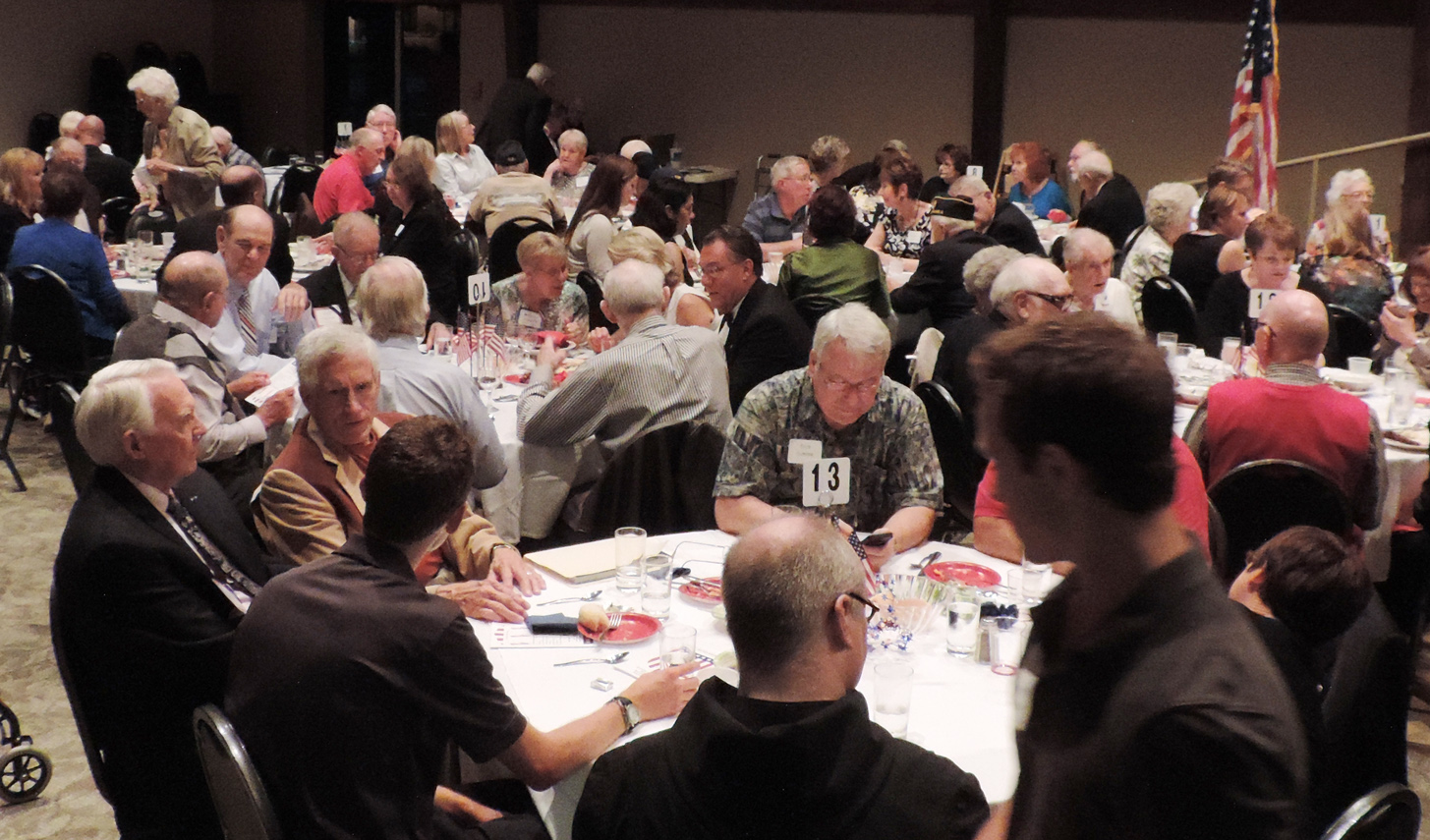 They came in twos and threes, walking slowly, some assisted by companions as they made their way to their tables. Aging men and a few women, unaccustomed to crowds and bright lights find their places and sit quietly, waiting for whatever is going to happen next.

Such was the scene at the sixth annual World War II Veterans Recognition Banquet held Sept. 20 at St. Alphonsus Liguori Catholic Church in Zionsville. Thirty-three veterans, representing virtually every armed service and every battle campaign of the biggest war the world has ever known, came from various parts of Central Indiana to be honored for their service so many years ago.

They looked too ordinary to be heroes. Most were dressed in civilian clothes, although a few sported ball caps or jackets commemorating their branch of service, or a particular battle. On tables along the walls, samples of uniforms and combat gear from the era testified to what they had done, where they had been and the dangers they had survived.

The annual banquet began as a Valentine dance and later included a fly-in of military aircraft at Indianapolis Executive Airport before moving to the church three years ago, according to Jim Weaver of Zionsville, one of the event’s organizers. Weaver said the banquet had three purposes.

“We want to recognize these veterans for their service, express our gratitude to them, and instill a spirit of patriotism in the community,” he said.

The ranks of World War II veterans are declining rapidly. Most who served in the war are in their 80s and 90s now, and are dying at the rate of several hundred every day.

Each veteran at the banquet was recognized for his service, an honor accepted by each with quiet humility. Seven of those honored were among the 156,000 allied personnel who landed on the beaches of Normandy during the D-Day invasion.

Not everyone headed for France after the invasion got there. George Cox was aboard a transport ship Christmas Eve when it was torpedoed in the English Channel by a German U-Boat. Eight-hundred-forty men were lost. Cox survived.

Several Army Air Corps veterans were honored. Howard Kwitny was a tail gunner on a B-17 when it was shot down over Germany. He was captured and held as a prisoner of war. Jack Mansell was a fighter pilot who was shot down twice while flying escort with B-17s over Germany.

Jim Bradford was the navigator during a raid over Germany on Christmas Eve 1944 when 20 of the 36 planes in the squadron were shot down. Fred Hampton flew 29 missions as a tail gunner over Germany.

Not all served directly in harm’s way. Otis Burrus was General Douglas MacArthur’s payroll clerk in the Philippines, and Tom Redmond was a baker aboard the aircraft carrier Midway where he baked up to 5,000 loaves of bread each day. Norris Archer spent 100 days on a remote island in the Pacific building an airstrip that would play a large role in winning the battle for the Philippines. Several deceased veterans including Paul Kirby, Bob Coval and Bill Mattingly were represented at the banquet by their widows.

Keynote speaker during the banquet was Rev. Denis Robinson, president of St. Meinrad Seminary in southern Indiana who added a postscript to the evening by revisiting the Nazi Holocaust and recounting the actions of a few who fought their own war against Nazi Germany. Included among these was a Benedictine monk named Bruno who was credited with saving more than 400 Jewish children, Edith Stein who converted to Christianity from Judaism and who was killed at Auschwitz for her anti-Nazi work, and Ann Frank whose famous diary became a beacon of human goodness in an era of unparalleled tragedy.

The meal was served by members of the Knights of Columbus, and was sponsored by an anonymous donor.