You are at:Home»Current in Carmel»Carmel Community»Voice winner Josh Kaufman to star on Broadway 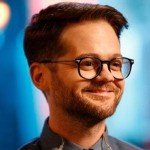 Photo courtesy of the Associated Press

Carmel resident Josh Kaufman is slated to star in the title role of “Pippin” on Broadway, beginning Nov. 4.  The latest winner of “The Voice” and one of the lead acts of Indy Jazz Fest, Kaufman said this is another one of his dreams fulfilled. Mark Kennedy of Associated Press quotes Josh, “It’s something I’m really excited about. I tend to be the kind of person who doesn’t want to do just one thing. I get bored, so I’m really excited about having a new challenge and having something different to do.”

“Pippin” is an ongoing revival show, directed by Diane Paulus, Tony Award winner as best director of a musical. The high energy Tony Award winning musical (2013) is notable for several characteristics, including the ‘70s style pop music written by Stephen Schwartz. Choreography is done by Chet Walker in the style of Bob Fosse. The physicality of the play, which includes trapezes, hoops, and teeterboard acts, all executed by sculpted bodies, is created by Gypsy Snider of the Montreal based “7 Fingers” circus troupe. The play also retains complex characterization, which many licensed road shows fails to do.

“Pippin” is the story of a young prince, the son of Charlemagne, who searches for meaning and significance in life. He traverses the pitfalls of war, frivolous love, tyranny, art and religion. The Broadway play shows a rather dark Brechtian side of life. However, ultimately, Pippin decides that a modest, ordinary life is best of all.

Kaufman is engaged for a limited run, from Nov. 4 until Jan. 5.  Via his Facebook page, Kaufman invited anybody attending his opening night performance to celebrate at his after-party. Ticket information may be found at: www.pippinthemusical.com