You are at:Home»Current in Carmel»Carmel Community»Big changes in store for the Monon Center 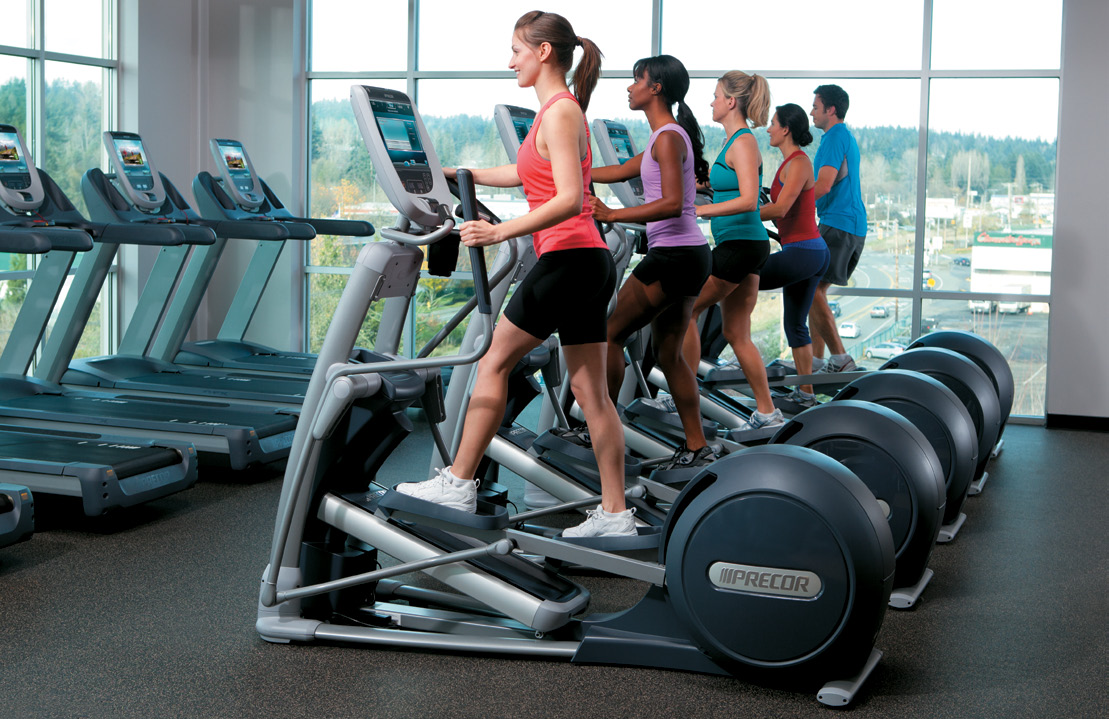 This is what the new elliptical machines will look like when the Monon Community Center receives them next month. The MCC will receive two Stairmaster Guantlet machines and and 12 Precor EFX 885. (Photo is courtesy of Precor)

There will be some new additions to the heavily-trafficked Monon Community Center in the near future.

Carmel Clay Parks officials say the center has been a huge success – offering a wide variety of activities on a cost-neutral basis. And now they are looking to expand.

Some improvements have already been installed, such as new classes, newly painted lines on the basketball courts and elliptical machines that generate their own electricity.

But more is expected down the road, such as an expanded presence in the center’s east building and possibly an enclosure around the Flow-Rider outdoor surfing simulator.

“We are always looking for the next new thing,” Carmel Clay Parks Director Mark Westermeier said. “We want to be a little different.”

When the MCC first opened, some pundits criticized the project saying there’s no way that membership fees could support the massive building’s costs. They claimed taxpayer subsidies would always be needed to prop up the facility.

And while it took a few years to achieve the goal, the MCC operates on a cost-neutral basis, which means that it’s self -supporting through its own revenue.

Parks board member Joshua Kirsh recalls how staff members went to a national meeting to learn about cost recovery only to find that Carmel was way ahead of the curve.

“They were being told that you achieve 16 to 30 percent cost recovery and then you pat yourself on the back,” he said. “So very early on we realized we were going to have to be innovators in this market and lo and behold our staff has done it. People have no idea that we have the best parks and our community center doesn’t cost the taxpayers. They have no idea.”

Some of the innovative ways to bring in revenue include creating private cabanas at the MCC pool where swimmers can rent the spaces with ceiling fans, coolers, speakers, screens and electrical outlets.

Another example is the Flow Rider, a wave machine that allows participants to jump on a board and try to stay upright. Westermeier said this was a great idea because it involves a skill, unlike going down a slide, so it encourages people to keep coming back to master it. It’s become so popular that they offer classes and even hosted a pro-am tournament that brought in surfers from all over the Midwest.

Now, Westermeier is looking at a way to offer this amenity year-round. While it wouldn’t be financially feasible to build a second Flow Rider indoors, he said they have spoken to architectural firms to see if there’s an affordable and effective way to enclose it.

Another innovative idea was adding a system called ReRev technology to 12 elliptical machines to help generate electricity from exercise. Installing the units will cost $12,000 but they expect half that money back in energy savings in just a year. So after two years, the technology will be paid off and will be generating added revenue.

“We can get a payback on a machine that would usually cost us money,” Westermeier said.

Of course, there’s also talk of slightly raising some membership prices as demand increases. Westermeier said it’s tricky because the center wants to stay competitive and offer the amenities that members desire, but it’s also part of their mission to provide the best value possible. It’s meant to be a facility for everyone

The MCC has increased so much in popularity that Westermeier said there is talk of expanding fitness facilities into the center’s east building, which has been traditionally used for classes, private events and banquets. The difficulty would be setting up a system to get members in and out of that area. But increasing use of that building could mean more machines and more classes.

“We’re completely full, so to increase new revenues we need to expand, mostly our fitness area, mostly in the east side of the building,” he said. “We’ve been doing it all along, but we’re going to step it up a little.”