You are at:Home»Current in Zionsville»Police investigating car wreck into porch on Main Street 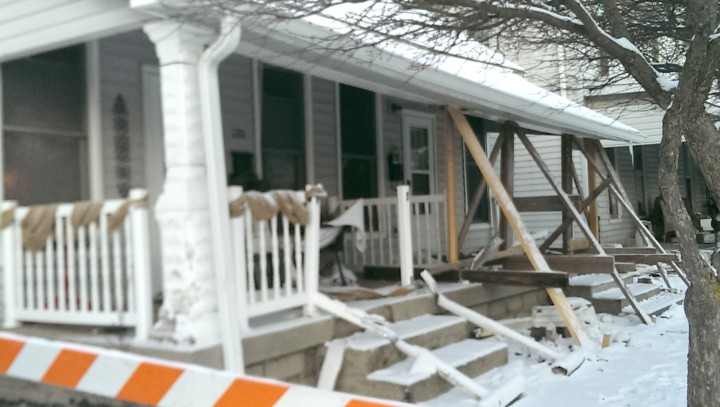 Boards prop up the roofline of a Main Street porch after a car collided into it on Feb. 4. (Photo by Heather Lusk)

Police are investigating what caused the driver of a car to strike a light pole, travel along the sidewalk and come to a stop on front porch of a duplex on Feb. 4. The accident occurred shortly after 3 p.m. in the 100 block of N. Main Street.

The driver of the vehicle and a resident of the duplex suffered minor injuries, said Zionsville Police Department Captain Robert Musgrave. Debris from the wreck also damaged the window of The Village Parfumerie nearby.

Penny and Jeff Edmunds were in nearby Robert Goodman Jewelers when they heard the noise from the light post being struck and dragged.

“It sounded like something pulling a trailer,” Penny Edmunds said.

They raced outside and initially didn’t see anything out of order.

“I looked up and down and there was nothing on the street,” Jeff Edmunds said.  Then they realized that the car was on a porch a few doors away.

According to the Edmunds’ the driver traveled between parked cars and the buildings along the sidewalk before hitting the porch of the duplex.

“An hour earlier and (the driver) would have hit us or anyone else who was walking there,” Jeff Edmunds said. “It’s lucky that someone wasn’t seriously hurt.”