You are at:Home»Current in Westfield»Grand Park indoor soccer facility vote put on hold by Westfield council 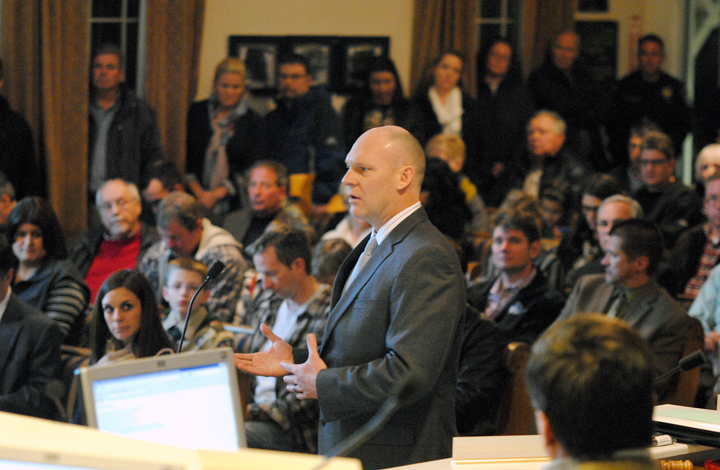 Jeff Harpe, mayoral candidate who filed an open-door lawsuit on Dec. 10, voices his feelings against the proposed $53 million indoor soccer facility at Grand Park for a second time at the Feb. 9 Westfield City Council meeting. (Photo by Robert Herrington)

The Westfield City Council is taking more time to consider public comments before deciding the fate of the proposed $53 million indoor soccer facility at Grand Park.

The packed meeting on Feb. 9 included 40 minutes of public comment. In comparison, the original ordinance hearing had two hours of public comment. Proponents like the Westfield Chamber of Commerce and sports associations said the facility will be an economic development driver, while those against have voiced concerns about the city’s financial role in the project.

“There were a lot of questions asked tonight. I believe we have a lot of the answers but I’m not sure we have all of them,” said Councilor Steve Hoover, who motioned for the tabling. “That way we have time to review all of these concerns. I don’t want this to have the appearance of being rushed through.”

The council previously approved the project on Oct. 27. However, the council decided to move forward with a new but similar ordinance after mayoral candidate Jeff Harpe filed an open-door lawsuit on Dec. 10. Harpe questions the process behind the approval and alleges that the council’s finance committee met privately to discuss the deal. The city has admitted no wrongdoing and has filed a motion to dismiss the lawsuit.

Harpe described the Feb. 9 hearing as a “revote on something that was already voted on” and said he was very concerned about this facility for the taxpayers.

“I’m here to challenge you to look at the situation with both eyes because you do represent the residents out there and it’s important they have the facts, figures, honesty and transparency. Who’s the puppet master here? Who is pulling the strings for the city council? What’s at stake if this place is built and people walk away with their golden parachutes and taxpayers are left on the hook? Nothing about this makes any sense.”

Mark Webber, executive director for Indiana Fire Juniors, said the soccer organization will hold seven events this year at Grand Park with 1,000 teams (65 percent from out of  state) coming to Westfield for their events alone.

“We use four different locations for indoor training, three are in Indianapolis,” he said. “We’re falling behind the states of Ohio, Wisconsin and Michigan because they all have year-round facilities.”

Whether you are for or against this proposal, Councilor Rob Stokes asked resident to look at the big picture.

“The city has a long-term perspective going here,” he said. “Is it a lot of money? Yes. Is it a risk? Yes. Has it been researched? Yes it has. We have gone through lots of iterations on how to make this work best for us. I hate to use the word trust because apparently there isn’t a whole lot of that going on right now, but we do this because we want to advance the city.”

A decision on the indoor facility is likely before the end of the month.

A hearing on the open-door lawsuit is scheduled for Feb. 17 in Hamilton Circuit Court. If the city wins the motion to dismiss, it could begin construction on the facility based on the Oct. 27 vote. If Westfield loses, the council is set to vote on the new ordinance at its Feb. 23 meeting.

Westfield is looking to build a 370,000-square-foot facility, which will house three full-size professional soccer fields, at land it owns at Grand Park. The facility will be built by Holladay Properties and Westfield would have the option to buy it once it opens. Holladay Properties is receiving a $25 million loan for construction that Westfield would pay back, nearly $53 million including interest, during the next 25 years.

The city would use funds collected from lease agreements and revenue sharing to pay back the loan. Westfield has found its two anchor tenants in Byrd Enterprises and Indiana Sports Properties, which already manages fields at Grand Park. Combined, the tenants will pay more than $2 million annually. Deputy Mayor Todd Burtron said that amount includes $250,000 of profit which will be used within Grand Park for maintenance and upkeep costs.

“These two agreements provide cash flow needs for underwriting interest and operating costs,” Burtron said. “The city is not using our budget to fund operating. Our bills are covered with these two anchor tenants.”