You are at:Home»Current in Carmel»Carmel Community»Married life put front and center in ‘Moon Over Buffalo’ 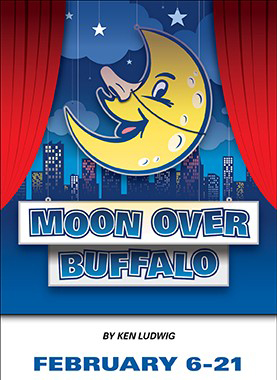 “‘Moon Over Buffalo’ will definitely keep you laughing!” stated executive director, John Hedges, when talking about the Ken Ludwig comedy that premiered Feb. 6 at the Civic Theatre. “I think it is a great reason for audiences to brave the cold and experience a fun night out.”

The show centers on characters George and Charlotte Hay, a couple of struggling actors on the brink of divorce who are performing at a repertory theatre in Buffalo, New York. Things start to look up when they capture the interest of a famous film director. But everything that could go wrong, does go wrong. The hijinks vary from a visit by their daughter’s clueless fiancé to an amusing uncertainty as to which play they are performing. The result is non-stop hilarity.

The production has eight characters, allowing the audience members to make a connection with each of them.

“The key for us is to keep these characters as genuine as possible,” stated Jean Arnold, who plays Charlotte Hay. “Comedy is only funny if audiences can relate to it and believe it is real.”

“The audience is always in on the joke but the characters are not.” Adds Bill Book, who plays George Hay, another character in the show. “The production relies heavily on comic timing and precision to make it a hilariously enjoyable experience.”

“Although it might be snowing outside, this story takes place in the month of June,” said Arnold. “Between these characters and all of their escapades, this show will definitely bring a little sunshine to audiences.”

“Moon Over Buffalo” runs until Feb. 21. For more information and to purchase tickets, visit CivicTheatre.org.

Share. Twitter Facebook Google+ Pinterest LinkedIn Tumblr Email
Previous ArticleSingle in the City: Carmel Indiana is named as one of the top best small cities for singles in the U.S.
Next Article Update: Fisher Police tracking down facts in neighborhood attack on jogger